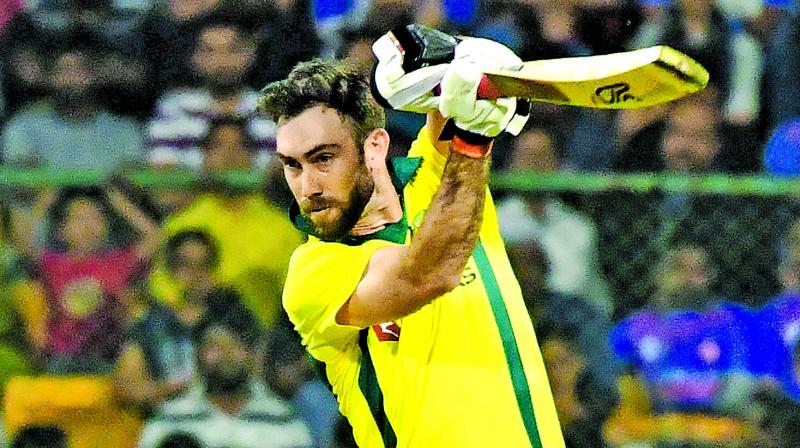 Glenn Maxwell en route to his unbeaten ton against India in the second T20 on Wednesday. (Photos: Samuel Rajkumar)

Bengaluru: Glenn Maxwell played a blinder off an innings to guide Australia home by seven wickets in the second T20 international at the M. Chinnaswamy stadium on Wednesday. Maxwell scored an unbeaten hundred (113 off 55 balls, 7x4s, 9x6s)  to help Australia clinch the series 2-0.

Chasing a daunting target of 191, Siddharth Kaul struck early on, cleaning up Stoinis in the third over. Aussie skipper Aaron Finch followed soon after trying to heave Vijay Shankar over mid-wicket which ended up in Dhawan’s hands. Glenn Maxwell and D’Arcy Short settled in with the right-left partnership not allowing the Indian bowlers to stick to a particular line. Shankar erred in length and was dispatched to the fence as his figures read 1/25 after his three overs. Short kept the asking rate in check as he found the boundaries with ease and milked Krunal Pandya’s first over for eleven runs. Maxwell cleared the ropes effortlessly in the very next over, of Chahal. He brought up his hundred in the 19th over effectively to seal the game. The lack of a fifth bowling option seemed to hurt India with Maxwell neutralising the bowling attack.

India racked up 53 runs in the powerplay, overcoming their slow start that saw only four runs from the first two overs. Rahul fell short of a deserved half-century, scoring 47 (3x4s, 4x6s) , when he attempted to cut Nathan Coulter-Nile only to end up scooping a catch to Richardson at third-man.

Dhawan was dismissed when he tried to play away from his body, as he lifted a Beherndroff delivery on the off side which was snaffled up by Marcus Stoinis with his fingers just off the ground.

Rishabh Pant perished while trying to hit Short against the turn and the heave was gobbled by a diving Richardson who flung himself across the turf to complete a stunning catch. Dhoni received a boisterous welcome from the Bengaluru crowd and clubbed Short for a six over mid-wicket and drove Cummins past long-off without getting bogged down.