MCG match, one of two most iconic Tests on planet: Kevin Roberts

In the ongoing Boxing Day Test between Australia and New Zealand, the first day of the match witnessed a record crowd for a match. 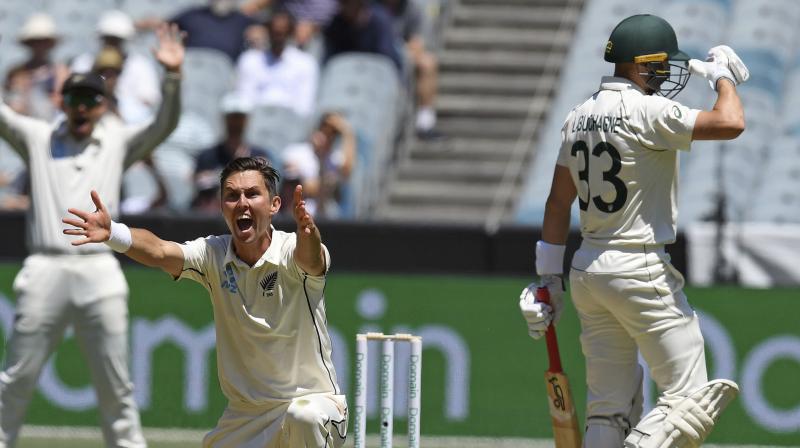 Cricket Australia's CEO Kevin Roberts has said that the Melbourne Cricket Ground (MCG) Test is one of the two most iconic matches on the planet, alongside the one at the Lord's Cricket Ground. (Photo:AP)

Melbourne: Cricket Australia's CEO Kevin Roberts has said that the Melbourne Cricket Ground (MCG) Test is one of the two most iconic matches on the planet, alongside the one at the Lord's Cricket Ground.

In the ongoing Boxing Day Test between Australia and New Zealand, the first day of the match witnessed a record crowd for a match between these two nations as 80,453 people turned up at the MCG to watch cricket.

"The reality is there is only one venue in Australia that can host over 80,000 people on Boxing Day as the MCG did yesterday. It was just a picture. That's something we are really grateful for and respect. The MCG Test is one of the two most iconic Tests on the planet, along with the Lord's Test," ESPN Cricinfo quoted Roberts as saying.

He also assured that New Zealand will be granted more Boxing Day matches and he stressed the need for making cricket popular outside three-four nations.

"We really value the partnership with New Zealand. We are already having some high-level discussions around the cricket calendar from 2023 to 2031 and we absolutely hope and look forward to hosting New Zealand at a Boxing Day Test well before another 32 years pass. They are a really important partner and nation in the world of cricket," Roberts said.

In recent media reports, it has been alleged that BCCI president Sourav Ganguly wants to have a Super-Series involving England, Australia, and India. CA's Roberts hailed Ganguly's appointment as the president.

"I think it's an example of the innovative thinking coming out of the BCCI with Sourav Ganguly as president. In his very short time, only a couple of months, we have already seen India commit to and host a day-night Test in Kolkata, so a brilliant result there," Roberts said.

"And now a suggestion around the Super Series, another potential innovation. We will be in India next month and Bangladesh talking about the future cricket calendar. We're in discussions with New Zealand as well and I was recently in Pakistan talking about the importance of our future partnership with Pakistan," he added.

The CEO also said that he is determined to make cricket grow in other countries. Australia will also be hosting Afghanistan next year.

"We are really respectful of the importance of our international cricket relationships and our role as a leader in world cricket in supporting the development of cricket in other countries," Roberts said.

"We have discussions with all member nations of the ICC and take really seriously our role to partner them and working together with them to grow the game," he added.