Warner slams century and Smith remains unbeaten on 65 as Australia end Day One at 244/3. 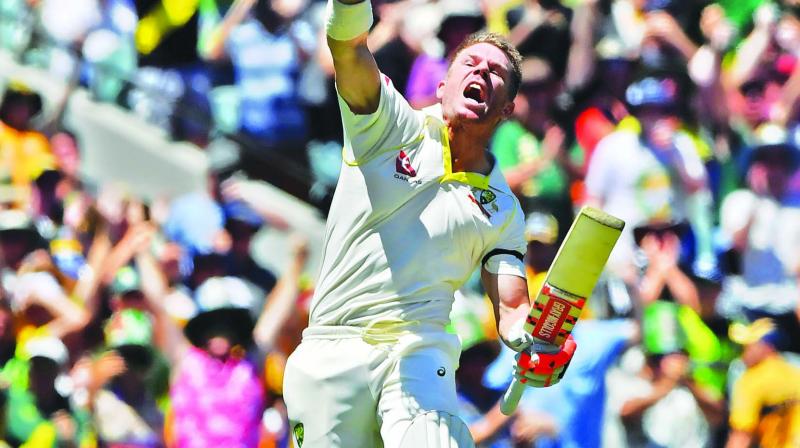 Australia’s David Warner celebrates his century against England in the first day of the fourth Ashes Test in Melbourne. (Photo: AP)

Melbourne: David Warner posted a century after a no-ball reprieve and skipper Steve Smith was on track for four straight Boxing Day tons as Australia made a solid start to the fourth Ashes Test against England on Tuesday.

Warner received a massive let-off on 99 to claim his 21st Test hundred as an Australia side chasing a series whitewash took full advantage of winning the toss on an unresponsive Melbourne Cricket Ground drop-in pitch.

The aggressive opener, who had been marooned in the 90s for over 40 minutes, was poised on 99 to bring up his century as he faced the last ball of debutant Tom Curran’s fifth over.

But instead Warner top-edged a catch to mid-on and walked off to the jubilation of the England team, only for replays to detect a no-ball for Curran overstepping, meaning Warner was called back to the crease.

The next delivery Warner added further to the England team’s dark mood when he raised his hundred off 130 balls with a flick off his hip and celebrated by leaping into the air and ripping off his helmet to salute the 88,172 Boxing Day crowd at the MCG.

But Warner didn’t stay at the crease for much longer after his massive let-off, as he was caught behind off James Anderson for 103.

Smith, who hasn’t been dismissed in a Melbourne Test match since Boxing Day 2014, was still batting at the close on 65 with Shaun Marsh not out 31 and Australia 244/3.

In the last three showpiece Boxing Day Tests, Smith has scored 192 against India, 134 not out against the West Indies and an unbeaten 165 last year against Pakistan.

So far in this series Smith has amassed 491 runs at a stunning average of 163.66 from five innings.

Australia have already reclaimed the Ashes after taking an unassailable three-nil lead in the five-Test series and are seeking a 5-0 whitewash over the beleaguered tourists.

The Australians freewheeled to lunch at 102/0 with Warner leading the charge but England’s bowlers toiled away under a hot sun to restrict the home side in the remaining two sessions.

In the process of raising his century Warner brought up 6,000 runs in his 70th Test, making him the joint fourth-fastest Australian to do so behind Don Bradman, Ricky Ponting and Matthew Hayden and alongside Greg Chappell.

Stuart Broad got his first wicket since the second Adelaide Test to end a barren run of 414 balls when he had Usman Khawaja snapped up by Jonny Bairstow for 17, and incoming Shaun Marsh survived a leg before wicket review off the next ball.

England also took the wicket of Cameron Bancroft in the middle session leg before wicket for 26 off 95 balls facing Chris Woakes in the 35th over.

Bancroft shared in a 122-run opening stand and was the passive partner as Warner chased runs.

It was the first toss captain Joe Root has failed to win in the series, and was a potentially bad one to lose on a straw-coloured pitch with an unforgiving day ahead in the field for England.

The Australian players were wearing black armbands in memory of Thomas Maggs, wicketkeeper Tim Paine’s father-in-law, who passed away on Sunday.