Fans point out absence of Bumrah who is recovering from lower back injury. 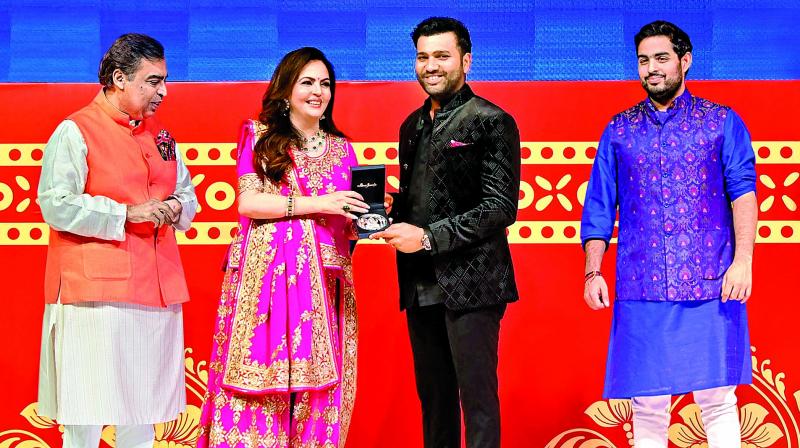 The franchise shared the pictures on social media on Friday, and two people missing from the celebration pictures were premier fast bowler Jasprit Bumrah and team mentor Sachin Tendulkar.

MI fans pointed out their absence and one fan even wrote on Twitter whether Jasprit Bumrah was heading to Virat Kohli led Royal Challengers Bangalore (RCB) for the next season.

However, the MI Twitter handle decided to reply to the fan by posting a GIF of captain Rohit Sharma, with the words “Stay Calm” emblazoned on it.

Bumrah has emerged as a top bowler in the world cricket ever since he began playing for  MI in 2013. He has been their strike bowler in the last three seasons.

“Until 2013, we didn’t win a single trophy. And now, I stand here with the most successful team,” Rohit Sharma said at the function.

The 25-year-old Bumrah recently sustained a stress fracture in his lower back because of which he was not picked against South Africa and is not available for the upcoming series against Bangladesh as well.

Recently, Indian bowling coach Bharat Arun revealed that the Gujarat fast bowler doesn’t need surgery and his recovery is on the right path and hopes for him to return to the side before their “next big challenge” — away Test series in New Zealand.

He is believed to be recovering in London and perhaps the reason behind his absence from the Diwali bash.

Bumrah and Indian batswoman Smriti Mandhana were the two Indian names among the five winners of the prestigious Wisden India Almanack Cricketer of the Year award which was announced on Friday.