He said poor application in the middle overs let the team down yet again. 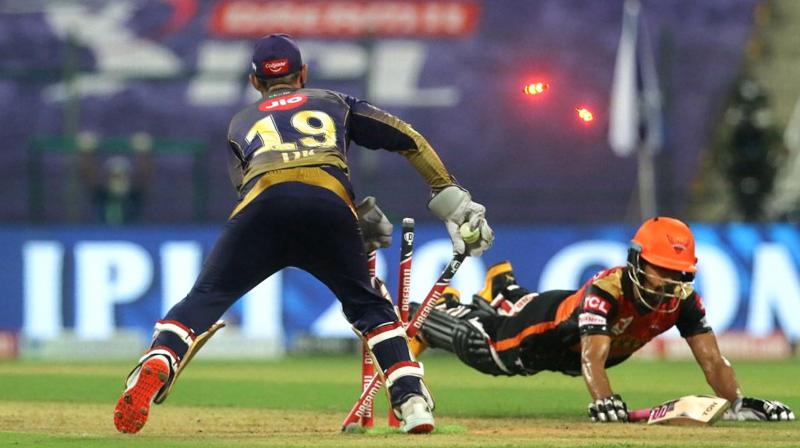 Coming in place of an injured Vijay Shankar, Bengal wicketkeeper batsman Wriddhiman Saha was particularly slow to start with and wasted a lot of balls before being run out. (Photo | PTI)

Abu Dhabi: Sunrisers Hyderabad skipper David Warner has criticised the below-par effort of his batsmen after they slumped to their second successive defeat in the ongoing IPL, saying poor application in the middle overs let the team down yet again.

Manish Pandey (51 off 38) and Wriddhiman Saha (30 off 31) failed to take on Kolkata Knight Riders’ disciplined bowling in the middle overs to set a modest 143-run target after Warner chose to bat.

Coming in place of an injured Vijay Shankar, Bengal wicketkeeper batsman Saha was particularly slow to start with and wasted a lot of balls before being run out.

“We could have applied a bit more pressure on the bowlers and tried to hit more boundaries in that middle period,” Warner said after the seven-wicket loss to KKR on Saturday.

“I’m disappointed more about the dot balls we played—there were about 35-36 dot balls in the middle, which in T20 cricket is not acceptable. I think we need to change our mindset.”

The dashing Australian opener said SRH were 20-30 runs short of what could have been a good score.

“We were probably 20-30 runs short and then it would have been a good game. If you don’t put the right total on board, it’s goning be hard to defend.

“We could have hit a little bit harder, taken a few more risks. We just can’t be having batsmen on the bench and just two batsmen batting 20 overs. We played four-five overs for about 20 runs after I got out,” Warner said.

Saha came in at No 4 ahead of Afghan hard-hitting all-rounder Mohammad Nabi, who was fresh from his exploits in the Caribbean Premier League.

But Warner defended the move, saying he wanted a “genuine batsman” to build a partnership after his dismissal.

“You got to put a genuine batsman in, when I got out, we were trying to build partnerships. It’s easy to say, send pinch-hitter in or what not, but you got to generate some momentum,” he said.

“It’s just unfortunate that they bowled well. They pulled their length back. We’re unable to hit the boundaries. They executed well.”

“Obviously, it was a very poor and soft dismissal for myself. We just got excited, pressed the button and started going on,” he said.

“I don’t blame anyone. I take full responsibility for myself for not batting through the overs and getting a soft dismissal.”

SRH will next lock horns against in-form Delhi Capitals at the same venue on Tuesday.

Warner said they would need to have a better look at the Sheikh Zayed Stadium here, which is bigger than what they are used to playing in India.

“We are playing here again. The boundaries are a tad bigger than what they are in India. We have to work out where we are going to get our boundaries.

“It’s a learning curve for everyone. You got to try and work out how we’re going to get the boundaries, which area of this big ground to score. We will get a good look at this wicket now moving forward to the next game,” he signed off.