Law's comments came ahead of the fourth ODI against England at The Oval,where West Indies will look to bounce. 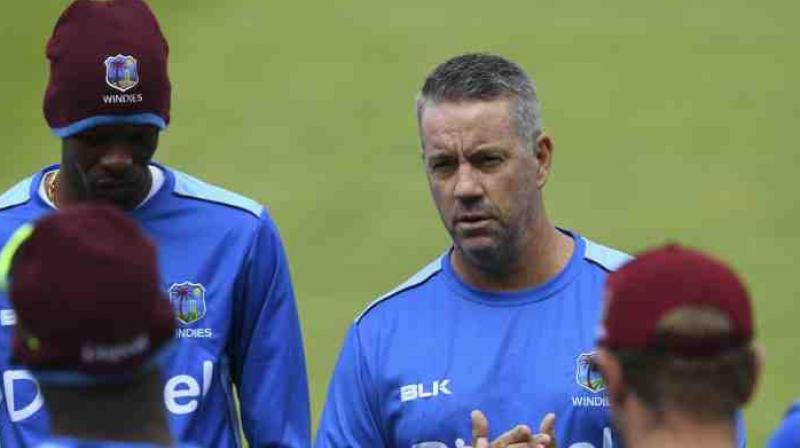 In the absence of Ben Stokes and Alex Hales due to the former's arrest, Law just wanted the West Indies' batsmen to understand the simple art of pacing the innings. (Photo:AFP)

London: West Indies coach Stuart Law has called on his side's batsmen to focus on getting their `tempo` correct as the Caribbean side looks to improve their performance in the 50-over format of the game.

Law's comments came ahead of the fourth ODI against England at The Oval, where West Indies will look to bounce back after going down 0-2 in the five-match series.

In the absence of Ben Stokes and Alex Hales due to the former's arrest, Law just wanted the West Indies' batsmen to understand the simple art of pacing the innings.

Stokes and Hales have been made unavailable for the fourth ODI after Stokes was arrested in Bristol in the early hours of Monday morning. Hales was with Stokes on Sunday night.

"We are not quite playing at the tempo that suits one-day cricket.We are caught between Test cricket and T20 cricket. Of course we are very good at T20 cricket. We are ever-improving in the Test match arena. This is the arena we need to make sure that we start grabbing hold of and we start understanding, particularly with what we have got coming up early next year [at the World Cup Qualifiers in March]," ESPNcricinfo quoted Law, as saying.

Law also cited example of swashbuckling batsman Chris Gayle's knock of 94 in Bristol ODI that guided the West Indies to a robust beginning before the innings floundered equally swiftly. England went on to win that match with 10.5 overs to spare.

"We are either going too hard too early, and not spacing it out over longer period of time. It was pretty evident the other night - we got bowled out with 11 overs to go and we were still up with the rate. Our tempo was pretty good in certain aspects, but we need to improve. We need to make sure that we have two set batsmen going in the last 10-15 overs. If we have got that we can be even more destructive," he said.

The Caribbean side's coach believes that his team just need a little bit better performance from their top order and a little smarter batting through that middle period.

Since 2015 World Cup, West Indies batsmen have scored just five centuries in 34 matches they played so far, the least among the major teams.

The Caribbean side's average run rate in the middle overs has also been just 4.98 since the World Cup, which is again the lowest among all top-eight ranked teams.