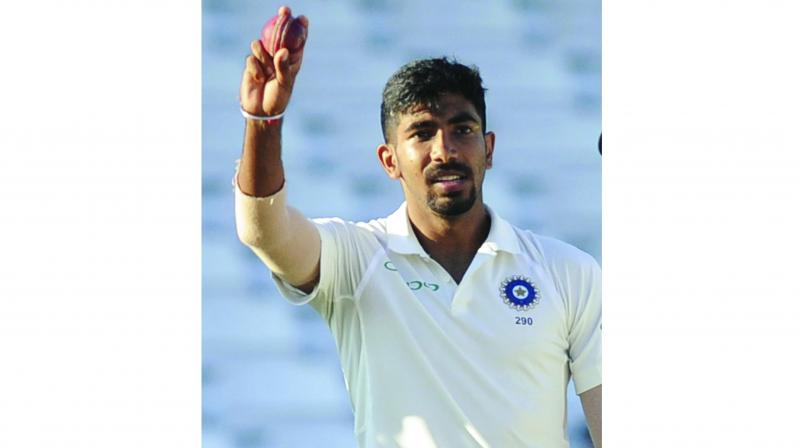 North Sound (Antigua): Jasprit Bumrah led a devastating fast bowling assault in routing the West Indies for 100 to earn India a crushing 318-run victory in the first Test at the Sir Vivian Richards Stadium in Antigua on Sunday.

Set an improbable target of 419 after Virat Kohli declared the tourists’ second innings at 343 for seven in mid-afternoon, the hosts were demolished in 26.5 overs for their lowest Test innings total ever against India with Bumrah returning the outstanding figures of five for seven off eight overs. Four of his victims were comprehensively bowled in an irresistible spell in which he displayed a previously unseen ability by him to swing the ball both ways.

“I’ve been working a lot on this aspect of my game and I am really happy to see how it worked out today,” he said.

“I was a bit stiff in the first innings but it all came out well today. I just have to keep on learning my craft.”

Ishant Sharma supported Bumrah brilliantly in sharing the new ball, taking three for 31 to finish with eight wickets in the match.

Mohammed Shami chipped in with two wickets which reduced the West Indies to 50 for nine and it took some big hitting from Kemar Roach, who top-scored with 38, to double his side’s total.

It was Sharma who ended Roach’s resistance and sealed victory via a top-edged hook to wicketkeeper Rishabh Pant.

He could have also had the wicket of Shimron Hetmyer but Kohli grassed a straightforward catch at third slip.

Sharma trapped debutant Shamarh Brooks leg-before and then made Hetmyer pay for his continuing loose play outside the off-stump, Rahane atoning for his captain’s earlier error in the slip cordon.

Languishing at 15 for five at tea, Bumrah completed his five-wicket haul by targeting the stumps of Shai Hope and beleaguered West Indies captain Jason Holder with heat-seeking accuracy.

“We really have to stop making excuses and sort this issue out. It just keeps on happening,” said a frustrated Holder on his team’s latest batting collapse.

“We failed to capitalise on a good position in the first innings and just weren’t up for it in the second. We can’t go on like this.”

Ironically the day started brightly for the hosts when Roston Chase removed Kohli before he had added to his overnight score of 51.