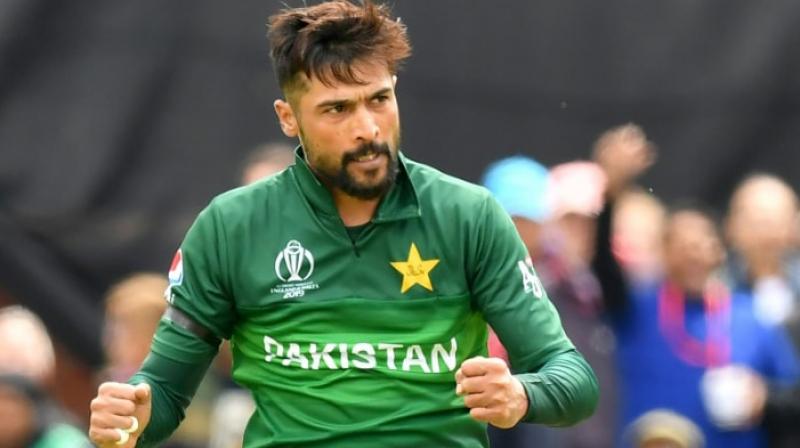 The 27-year-old further said that it was a dream come true for him to play the red-ball cricket. (Photo: AFP)

Along with Imran Khan, Amir in a tweet conveyed thanked former cricketers Wasim Akram, Shahid Afridi, Waqar Younis, and Mohammad Yousuf. He also thanked his fans and urged them to support him in his decision of retiring from Test cricket.

"Thank you PCB, our PM @ImranKhanPTI @wasimakramlive bhi @SAfridiOfficial bhi @waqyounis99 & @yousaf1788. Thank you and my fans for always supporting me and I hope you all will support my this decision also see video link," Amir tweeted.

Thank you PCB, our PM @ImranKhanPTI @wasimakramlive bhi @SAfridiOfficial bhi @waqyounis99 & @yousaf1788. Thank you and my fans for always supporting me and I hope you all will support my this decision also.see video link https://t.co/BbAYzPbncl

Amir in the video said that it was an honour for him to play Test cricket for Pakistan and register some records.

"There are very fewer people whose dreams come true. They represent their country and become a Test cricketer. It was an honour for me that I played Test cricket for Pakistan. I became youngest ever fast bowler who took 51 wickets in 14 Test matches then got six wickets at Lord's."

The 27-year-old further said that it was a dream come true for him to play the red-ball cricket. He thanked God for giving him all the opportunities. He also acknowledged his five-year time off the field and said it is difficult for a fast bowler to return and train after a gap.

"It was my dream to represent Pakistan in Test cricket. Allah made my dream come true, gave me respect and helped me in creating a world record. But due to some ill-fate and cricketing reasons, I retired from the format."

Amir also highlighted that he had to choose between the formats as his body was not getting enough rest. He said that he started to sustain injuries and his performance was getting affected. He added that a fast bowler's career is not that long, so keeping in mind his fitness he decided to end his Test cricket career.

"I played Test, ODI, and T20 cricket consistently for three years and my body didn't get enough rest. In this duration, I sustained injuries. I thought I have to choose as one's performance is affected - sometimes in Test cricket and sometimes in white-ball cricket."

"With time I will get older and a fast bowler's career is not that long. So, keeping in mind my fitness and other things, I decided that I should focus on white-ball cricket," he signed off.

Amir made his Test debut against Sri Lanka in Galle in July 2009. He represented his country in 36 Tests, taking 119 wickets at an average of 30.47. His best bowling returns - six for 44 - came against West Indies in Kingston in April 2017.