Shrugging off his IPL Blues, Gurbani looks to england

The Nagpur-born civil engineer-turned cricketer hopes to fulfill his dream of playing for India XI. 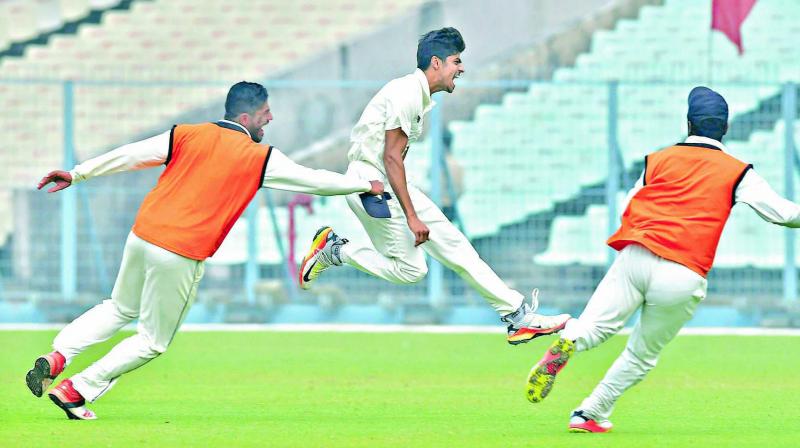 Three days into the auction and there was no bid for Gurbani.

Vidarbha pacer, Rajneesh Gurbani has seen the highs as well as the lows in the last few months. The Ranji season ended for Gurbani and his team with a trophy but that joy was shattered soon with him going unsold in the Indian Premier League (IPL) auction. However, the disappointment was washed away with a call-up for the India A squad, which will travel to play West Indies A and England A.

Did he go into a slump while the resplendent IPL was underway? No. For someone who finished his Ranji season with 39 wickets and a hat-trick in the final, that was not the path to take though the initial days were harsh. “Tu toh koi team mei jaane waala hai,” was something that he heard every day after the domestic season ended in January.

Three days into the auction and there was no bid for Gurbani. Feeling very let down, the first couple of days were hard to take. He was not to blame for expecting so much. The right arm fast-bowler was breathing fire in the domestic season and was hit by harsh reality during the auctions.

For someone who completed his engineering without flunking in a single semester, it was a hard one to take.

“After a couple of days went by, I realised that there will be failures and I learned how to deal with it. I started practising even harder,” he says. “I approached Chandu sir (Chandrakant Pandit) to help me improve. I asked them (coaches) what is wrong and where I can be better. So they started grooming me mentally, worked on my action and late-swing.”

Not that his action had anything wrong but he was hungry for more. “I did not change too much. My coaches told me to use some muscles that I had never used. I worked hard to make them strong and there’s a difference in my bowling now,” says the Nagpur-based bowler.

Pandit is someone who transformed an ordinary Vidarbha team into title winners. It was the first time that the east Maharashtra side even made it to the Ranji Trophy finals.

There is a lot that Gurbani owes to the coach. “If any new student listens to Chandu sir with an open mind, he will do things right and there is no second thought about it. He taught me to never get complacent and I go by it. Even if I take five wickets, I want to go for 10 and that’s something that I have learned from him,” says Gurbani.

Currently, the 25-year old is in Bangalore with the rest of the group that will travel for the four-day match against England A from July 16. Generally, when a side is traveling to England, coaches choose Bangalore as the venue for the conditioning camp because its weather conditions are similar to the ones there.

The English pitches are not like the ones where the ball swings like billy-o. No one imagined a score of 481 on a Nottingham pitch. On June 19, England notched this total against Australia in an ODI. Gurbani is aware of this.

“I know the wickets are not as favorable for bowlers. It’s not like the ball will swing for sure. I am working more on the length than swing,” he says.

If his feat from the Ranji season continues in England, he will surely become a prospect to feature in the Virat Kohli-led side. Gurbani is not in a hurry but at the same time, he is not denying his dream. “See, at the back of my mind, I want to play for India. But I also want to move step by step,” he signs off.