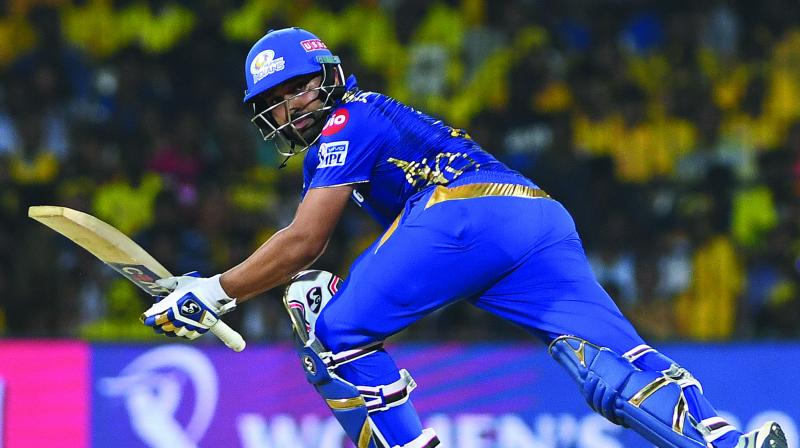 Mumbai Indians captain Rohit Sharma plays a shot during the match against Chennai Super Kings at the M. A. Chidambaram Stadium in Chennai on Friday. (Photo: E. K. Sanjay)

CHENNAI: Mumbai Indians have done it again. Rohit Sharma’s team on Friday accomplished what other sides couldn’t — beating Chennai Super Kings at their fortress. It was Mumbai who halted Super Kings’ marauding run (10-match streak) at Chepauk in 2015 and they returned to end the defending champions’ seven-match winning spree — five-in-a-row this season — with a 46-run drubbing.

The convincing victory pushed Mumbai to No.2 spot with 14 points in 11 games.

Super Kings cut a sorry figure without their talismanic leader M.S. Dhoni, who missed the match against due to a bout of fever. A few forced changes didn’t help the team’s cause either.

Mumbai stuttered to 155 for 4 after being in a commanding position (84 for one) at the half-way mark. Rohit Sharma stroked a 48-ball 67 and shared a 75-run partnership with Evin Lewis for the second wicket, but the powerful Mumbai middle-order failed to cash in on the good start.

In-form Quinton de Kock dug his own grave after hitting Deepak Chahar for a four and a six.  The big-hitting Evin Lewis looked a pale shadow of himself in his run-a-ball 32. With Rohit looking fluent at the other end, Lewis’ uncharacteristic knock didn’t hurt Mumbai much.

It was left-arm spinner Mitchell Santner who broke the shackles with a brilliant spell (4-0-13-2). Santner fired in as many as 15 dot balls. He kept Hardik Pandya (23 off 18) at bay and and took the wicket of Rohit. If not for the 17-run last over off Bravo, Mumbai wouldn’t have crossed 150-mark.