With Dhawan and Shaw at the top and the likes of Iyer, Pant and Colin Ingram to follow, Delhi would start as a confident batting unit. 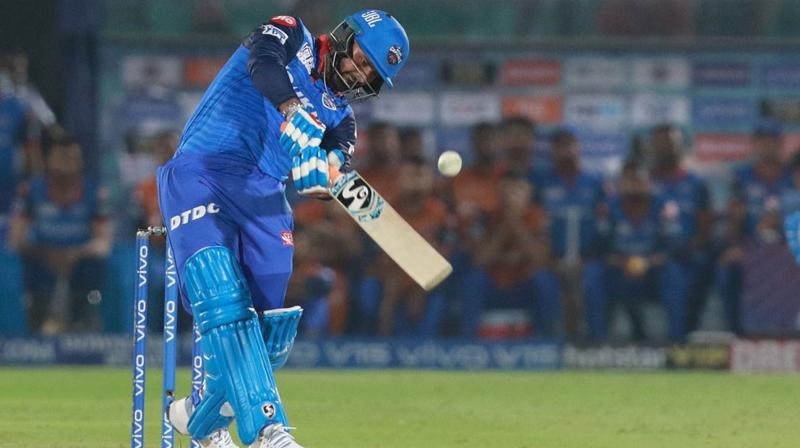 In their last match chasing 192 against Rajasthan Royals, openers Prithvi Shaw and Shikhar Dhawan laid the foundation with a 72-run stand which was followed by a blistering unbeaten 73-run knock by Pant. (Photo: BCCI)

New Delhi: Rishabh Pant and his ways, unconventional to the core and which have fuelled Delhi Capitals' rare title charge, will Sunday confront Virat Kohli and, ironically, in a city where he learned the ABC of cricket.

There has been no looking back since Kohli's Royal Challengers Bangalore arrested a long losing streak on April 19 in Kolkata.

RCB will enter the Feroz Shah Kotla, a very familiar place for their captain Kohli, on the back of a three-match winning run. But the visitors will still have to play out of their skins to stop Ricky Ponting and Sourav Ganguly's rampaging outfit.

A win will ensure that Delhi, who are currently in the third spot behind Chennai Super Kings and Mumbai Indians, reach the cut-off limit of 16 points needed for a play-off berth.

Delhi's performance at home has been woeful but having registered a win after two consecutive losses here, the Shreyas Iyer-led outfit will be high on confidence.

RCB will not be short on confidence either, the side seems to have regrouped successfully and found their groove. They won their last three games defeating Kolkata Knight Riders, table topper CSK and Kings XI Punjab.

The wins had briefly lifted the Bengaluru based outfit from the bottom of the table to the penultimate spot. They have eight points from 11 games.

"The only focus was to play well as a team. Losing six in a row really hurt us. Literally no one in the team has been part of such a streak. So we just refreshed, thought about just enjoying ourselves and the important thing now is not to take on any pressure," Kohli had said after his team beat KXIP.

Delhi Capitals boast a solid batting line up with a perfect blend of experience and youth.

In their last match chasing 192 against Rajasthan Royals, openers Prithvi Shaw and Shikhar Dhawan laid the foundation with a 72-run stand which was followed by a blistering unbeaten 73-run knock by young Pant, who proved a point after being left out of India's World Cup bound squad in favour of Dinesh Karthik.

With Dhawan and Shaw at the top and the likes of Iyer, Pant and Colin Ingram to follow, Delhi would start as a confident batting unit.

For RCB, the likes of AB de Villiers, Kohli, Moeen Ali and Marcus Stoinis will look to capitalise on Delhi's inconsistent record at home.

However, their bowling remains a worry. RCB were dealt a huge blow when newly recruited Dale Steyn, who was brought in to replace the injured Nathan Coulter Nile, was ruled out of the IPL due to shoulder inflammation.

The side will draw inspiration from Navdeep Saini's match-winning penultimate over effort against KXIP. The fast bowler had taken the crucial wickets of Nicholas Pooran and David Miller giving away only three runs to hand his side the win.