It was on March 24 when Cameron Bancroft was seen tampering with the ball in a Test against South Africa. 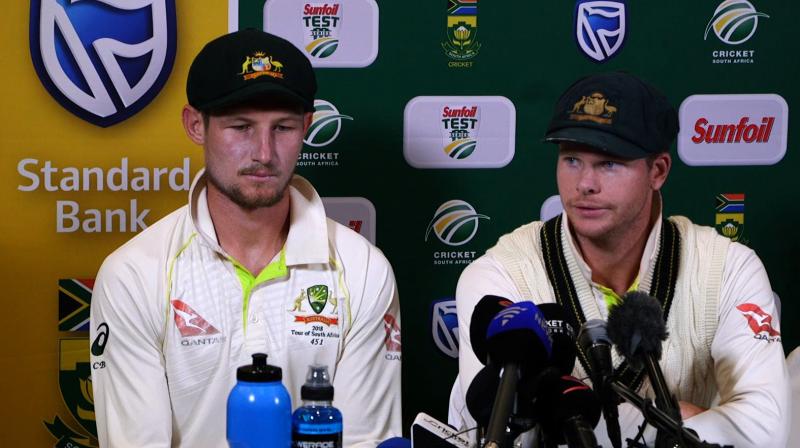 In a video gone viral, Aussie opener Cameron Bancroft is seen rubbing the ball with a yellow object during the third Test against South Africa in Cape Town. Bancroft then discussed the same with umpires Nigel Llong and Richard Illingworth, but the umpires neither took any action nor changed the ball. (Photo: AFP)

Cape Town: Australian cricketers Steve Smith, David Warner and Cemeron Bancroft have had a disappointing week so far. On Saturday, a video of Bancroft rubbing the ball with a yellow object during the third Test against South Africa had gone viral.

Soon after, both Steve Smith and Cameron Bancroft admitted that they did try to tamper with the ball, with Smith stating that the ‘Leadership group’ was aware of it.

With coach Darren Lehmann on the verge of getting the axe, here is how the heated controversy has panned out so far.

In a video gone viral, Aussie opener Cameron Bancroft is seen rubbing the ball with a yellow object during the third Test against South Africa in Cape Town. Bancroft then discussed the same with umpires Nigel Llong and Richard Illingworth, but the umpires neither took any action nor changed the ball.

Steve Smith and Cameron Bancroft admit that they tried to tamper the ball. During the post-match press conference on Saturday, Smith added that the ‘leadership group’ was well aware of the happenings. Smith also states that coach Darren Lehmann is however not involved in the incident.

Steve Smith had earlier denied Darren Lehmann's involvement in the ball-tampering saga, saying that the coaches were not involved. However, to make matters worse, a video of Lehmann chatting with Bancroft through a walkie-talkie went viral, raising questions on his involvement.

Steve Smith and David Warner stepped down as Australia’s captain and vice-captain respectively for the remainder of third Test. In Smith’s absence, Tim Paine is named captain for the rest of the match.

Steve Smith is given a one-match ban by the International Cricket Council (ICC), whereas Cameron Bancroft gets three disciplinary demerit points. As a result, Smith all but misses the fourth Test.

Australia suffer a shock 322-run loss to hosts South Africa in the third Test, thereby leading the series 2-1. Morne Morkel takes five wickets as the hosts bundle out the visitors for 107.

The front page of Australian newspapers carried the ongoing scandal of  ball-tampering, and then going against Steve Smith and co.

Steve Smith gives up Rajasthan Royals (RR) captaincy in the Indian Premier League (IPL) and passes the baton to Ajinkya Rahane, who will lead the side. Warner’s fate though is yet to be decided.

Sunrisers Hyderabad’s (SRH) mentor VVS Laxman opens up on the ball-tampering scandal, and says that the team will wait for Cricket Australia’s (CA) call on David Warner. Warner was retained by SRH and named captain again during the Indian Premier League (IPL) player retention event in Mumbai in January.

In another video gone viral, Cameron Bancroft is seen putting sugar in his pocket during the fifth Ashes Test against England in Sydney. Australia eventually became the Ashes champions, winning the series 4-0 with one Test being drawn.

Cricket Australia ( CA) is expected to make an important announcement in Johannesburg on Tuesday, which includes the future of Steve Smith, David Warner and Darren Lehmann.

In a latest development, Aussie opener Matthew Renshaw was on Tuesday named in Australia’s squad for the final Test, starting on Friday.