India out to save series

ndia will want to address their middle order with the World Cup in mind. 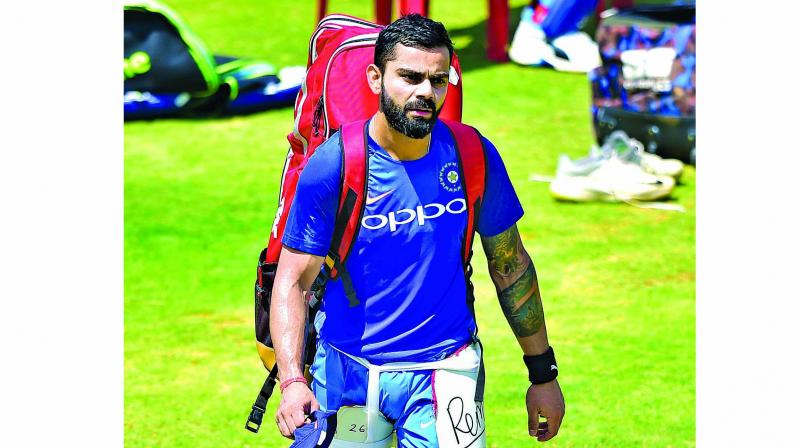 Virat Kohli leaves after a training session in Bengaluru on Tuesday. (Photo: Shashidhar B)

BENGALURU: India will look to put on a good batting display and level the two-match T20 series when they take on Australia in the second T20 at the M. Chinnaswamy Stadium on Wednesday.

Both India and Australia suffered a batting collapse in the middle overs which was the eventual cause of defeat for the Virat Kohli led side. India will want to address their middle order with the World Cup in mind.

K.L Raul’s return to form in the last T20 at Vishakapatnam would have enthused the Indian team management. His breezy knock kept the scoreboard ticking and he will want to make another statement at his home ground. With Virat Kohli and Rohit Sharma forming the top order along with Rahul, runs are guaranteed if the top order gets going but it is the middle order that will be the cynosure of all eyes. Time and again the middle order crisis has reared up and the scrutiny will only increase with the ODIs to come. In Vishakapatnam, the Indians were found wanting after the top order was dismissed and failed to notch up a reasonable total as wickets kept tumbling. Kohli will want the middle order to stand up and bat more sensibly, unlike the previous game where poor shot selection led to some tame dismissals.

Jasprit Bumrah’s exceptional bowling display kept India in the game with Australia chasing a modest total. Bumrah will once again be the leader of the bowling attack and it will be interesting to see if Kohli persists with Umesh Yadav or gives a chance to Siddharth Kaul. India opted for a three-man spin attack in Vizag and this might be where Vijay Shankar might get a look in as he lends weight to the batting order and can bowl medium pace with Yuzvendra Chahal and Krunal Pandya anchoring the spin department.

Australia would have felt let-off with the last ball win and will have only themselves to blame for their batting woes at the top. Aaron Finch has been susceptible to the incoming delivery in the recent past and the Indian bowlers would have noticed it in the previous game. Glenn Maxwell was the only stand out performer with the bat with Marcus Stoinis and D’Arcy Short running themselves out. The Aussies will know that the batting line-up must click in unison if they have to challenge India. The bowling seems to be settled with the quicks in fine form. Nathan Coulter-Nile bowled a fine spell and accounted for three wickets. Pat Cummins continues to grow in leaps and bounds and can make a difference with the ball with Jhye Richardson and Jason Beherndorff in support.