In the Black Caps' first Boxing Day Test at the Melbourne Cricket Ground, skipper Kane Williamson won the toss and opted to bowl. 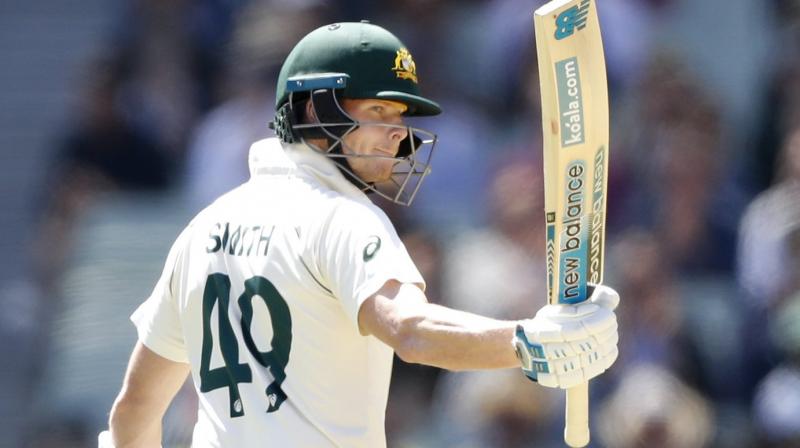 Master batsman Steve Smith ground out an unbeaten 77 Thursday as he zeroed in on yet another century, putting Australia in the driving seat after the opening day of the second Test against New Zealand. (Photo:Twitter)

Melbourne: Master batsman Steve Smith ground out an unbeaten 77 Thursday as he zeroed in on yet another century, putting Australia in the driving seat after the opening day of the second Test against New Zealand.

In the Black Caps' first Boxing Day Test at the Melbourne Cricket Ground since 1987, skipper Kane Williamson won the toss and opted to bowl, and it looked to be a good decision with Joe Burns out first ball and David Warner just before lunch.

But first Marnus Labuschagne, the world's leading run-scorer for 2019, and then Smith smacked half centuries to seize back control and leave them on 257 for four, frustrating the disciplined New Zealand bowlers.

Along with the fidgety Smith, Travis Head was not out 25, desperate for runs after a lean spell. Labuschagne made 63 with Colin de Grandhomme taking 2-48.

The signs are ominous for New Zealand with superstar Smith scoring centuries in his past four Tests in Melbourne, and a fifth looking likely.

"The way they bowled and placed their field, I had to be patient," said Smith. "It's not the kind of wicket you could go after them. I think we did pretty well today.

"The plan will obviously be to score as many as we can (on Friday)," he added.

"But after getting sent it, I think you'd take 257 for four at the end of the day. One more good partnership would be nice and sort of set the game up for us."

The visitors need to win to square the three-match series after crashing in the opening day-night clash in Perth by 296 runs.

It was a bold decision by Williamson to bowl on a pitch that has traditionally been docile and favoured the batsmen.

And it appeared to pay dividends in a sizzling opening over from Trent Boult, back after missing two Tests with a rib injury.

After three testing balls to Warner, his fourth clattered into Burns' middle stump, with the opener out for a golden duck to huge roars from the large New Zealand contingent in the 80,000-strong crowd.

Boult was sorely missed by the Black Caps in Perth and along with Tim Southee found early swing and zip with the ball.

"Obviously we would have liked a few more wickets on our tally," said Boult. "I think the overheads (cloudy conditions) and the way the pitch played in the first hour or two, it's annoying not to have them a couple more down.

"On the positive, they haven't got too far ahead of the game. Hopefully we get a couple (of wickets) early tomorrow."

After Burns fell, Labuschagne and Warner dug in to wrestle back the initiative before a Neil Wagner delivery saw Warner caught at slip for 41, with Southee taking an outstanding one-handed catch.

The in-form Labuschagne looked set for another big score after plundering his fifth consecutive 50, having converted three of his previous four into centuries.

But it wasn't to be and he was out in bizarre fashion, with a rising de Grandhomme ball ricocheting off his elbow and onto the stumps as he attempted to leave it.

Smith was met with a mix of boos and cheers as he walked to the crease and after a poor summer, by his standards, appeared determined to build a decent score.

It was slow going, but he brought up his 28th Test half-century off 103 balls -- his first in four Tests.

Along the way he passed Greg Chappell (7,110 runs) to become Australia's 10th highest run-scorer, with David Boon's 7,422 his next target.

As in Perth, Matthew Wade again came under a short-ball barrage from Neil Wagner, with one bouncing off his helmet as their rivalry heated up.

But he survived to make 38 and provide valuable support for Smith before edging de Grandhomme to wicketkeeper BJ Watling.