Rohit started his international career as a middle-order before becoming one of the best openers in the limited-overs game. 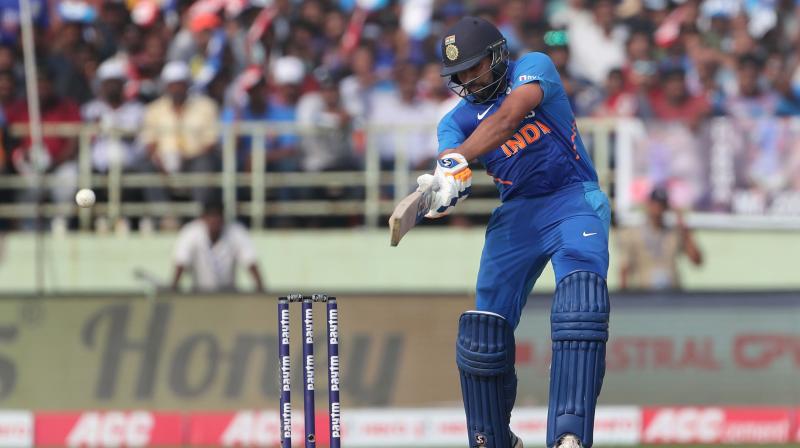 Playing flamboyant shots is not a 'crime' if they translate into results, reckons batting maestro Rohit Sharma, who says youngsters should have the freedom to express themselves freely. (Photo: AFP)

Mumbai: Playing flamboyant shots is not a "crime" if they translate into results, reckons batting maestro Rohit Sharma, who says youngsters should have the freedom to express themselves freely.

Rohit started his international career as a middle-order before becoming one of the best openers in the limited-overs game.

The 32-year-old had a memorable 2019 when he scored 10 hundreds across formats, including five in the World Cup.

Rohit shared his experiences of his early days as a cricketer during an interaction with the young trainees at his own cricket academy, here on Thursday.

"There is nothing harm in playing big shots, trying to play a flamboyant cover drive. When we were growing up and used to play shots in the air, we were taken out of the nets, which was not right because eventually, you want the results," said Rohit.

"If the guy is giving you results by playing the big shots, there is nothing wrong in that. As a young kid, growing in this generation, you want to play shots. You want to look good (while batting) but again it is very important what they think of their game and what understanding they have about the game," he added.

"What we need to be careful of is, if the player is doing mistakes again and again, then he needs to be told how he should go about it next time. I mean playing shots is not a crime."

Rohit emphasised that backing the young players is important to make them confident about their game.

"I would encourage that to play shots if they want to but at the same time, they need to understand that they need to produce results, that's the game. You score 100 off 50 balls or 200 balls, it doesn't matter, it still is a hundred.

"I mean if the guy is confident in his skills, I would back that skill. There should not be any restriction on how these young players want to bat. They should be allowed to bat freely, that's how they will produce results."

The India opener also wished the defending champions and India U-19 team the best for the upcoming World Cup in South Africa.

"Our team looks very strong as always. We won the last time. I wouldn't say that we will win this year as well. I am sure about one thing - they are going to play really hard. They have got great coaching staff. Of course, it's a big platform and in big platforms, India team generally tends to do well. I hope they bring the Cup back home," he added.