Smith was miffed after the umpire's decision to term the delivery of New Zealand paceman Neil Wagner as 'dead ball'. 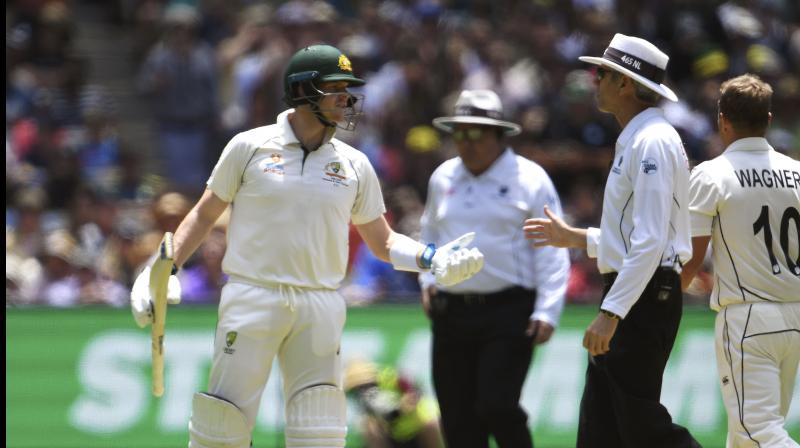 Australia's Steve Smith and on-field umpire Nigel Llong were involved in a heated argument during the ongoing Boxing Day Test between Australia and New Zealand at the Melbourne Cricket Ground (MCG) here on Thursday. (Photo:AFP)

Melbourne: Australia's Steve Smith and on-field umpire Nigel Llong were involved in a heated argument during the ongoing Boxing Day Test between Australia and New Zealand at the Melbourne Cricket Ground (MCG) here on Thursday.

Smith was miffed after the umpire's decision to term the delivery of New Zealand paceman Neil Wagner as 'dead ball'.

Wagner was continuously bowling short balls at Smith and he was able to hit the batsman twice. On both occasions, Smith tried to take a run after being hit on the body.

The first incident did not lead to any questions from the batsman, but the second resulted in a heated spat between Smith and Llong.

Wagner's delivery hit Smith on the ribs, and the batsman tried to take a run. However, Llong deemed the delivery as 'dead ball'.

The law of the game clearly states that a ball will be deemed as a dead ball if the batsman is not taking evasive action.

In this regard, the Australian batsman raised the same argument, saying he was taking evasive action and the run should be allowed. However, this was not how the umpire viewed the situation and led to confusion among the Australian camp.

Former Australian spinner Shane Warne, who was on commentary at the time, said that the umpire offered an incorrect explanation.

"Well, the umpire's wrong. Steve Smith has every right to be angry because the interpretation Nigel Llong is giving at the minute is incorrect," Foxsports.au quoted Warne as saying.

"The rule is if you evade a short ball and it hits any part of your body you are allowed to run even if you do not play a shot. I am sure someone is going to have a chat with Nigel Llong in the lunch break because Steve Smith is livid and rightly so," he added.

At the time of filing this report, Australia had reached a score of 155/3 in the Boxing Day Test.