It was a historical match as Wankhede Stadium became the ninth venue in the world to host 100 T-20 matches. 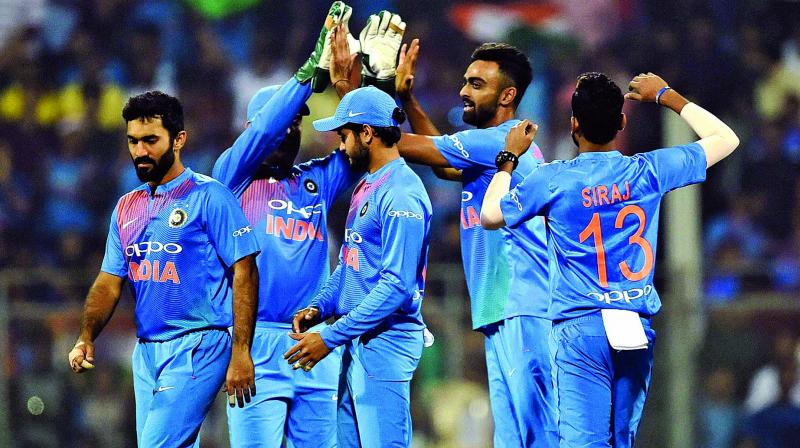 The Indian team rejoices after bagging a wicket at the T-20 held at Wankhede Stadium on Sunday.

After India’s thumping 5-wicket win over Sri Lanka, coach Ravi Shastri says that T-20 internationals are a platform for youngsters to screen test for the 2019 World Cup.

The game format has definitely been the most enthralling so far, but  Indian cricket team coach Ravi Shastri doesn’t care much for the outcome in T-20 games. Instead, he says, it is a better platform to test the mettle of youngsters for the future.

“There’s so much of cricket being played, so much T-20 cricket for us. We don’t care. You win or lose, it doesn’t matter. But give youngsters an opportunity, so you know who’s in the fray for 2019 (World Cup),” he said, after the final T-20 match versus the visiting Sri Lanka. The game was held at Wankhede Stadium, Mumbai.

One such youngster, who could be an up and coming name for the future is Washington Sundar. The right-arm off-spinner, who played for Rising Pune Super Giants in the Indian Premier League (IPL) last season, became the youngest T-20 international debutant for the country, at 18 years and 80 days.

Sundar was part of the bowling attack, which was led by another promising youngster, Jaydev Unadkat. Thanks to some quality bowling on a pitch offering seam movement and extra bounce, Jaydev and his bowlers manages to restrict the visitors to 135.

Talking about it after the match, Unadkat said, “It was a difficult wicket early on. There was more pace and bounce, and playing through the line as well as hot making was difficult, as we could make out in the first innings. There was no panic, and it was a comfortable chase in the end.”

Home boy Rohit Sharma captained India for the first time at this venue and displayed leadership qualities that people get to see here in the Mumbai Indians’ Indian Premier League matches. He was proactive and looked in charge of the proceedings, getting field placings right and rotating the bowlers smartly.

However, his Wankhede drought in limited overs cricket continued, with him scoring a 20-ball 27. He topped a pull off Dasun Shanaka, and wa scaught at deep square leg by Kusal Perera.

However, he did earn himself a laurel in his limited innings. He has now struck 65 sixes this year in all formats of the games, the highest in a calendar year by any batsman. Another local boy, Shreyas Iyer, showed some spine in the company of Manish Pandey, to put India on course for the victory.

Incidentally, this happened to be a historical match for the city, as Wankhede Stadium became the ninth venue in the world to host 100 T-20 matches. The comprehensive five-wicket win was also India’s first T-20I win in this stadium.

It was also the first win for India at this venue since October 2011 in the limited overs format during which it has hosted India in two ODIs and now three T20Is. This particular series is the first instance of India whitewashing an opponent in a T20I series comprising two or more matches on home soil. Wankhede stadium, which also hosted the iconic World Cup finals in 2011 that India won in a nail-biting finish, was a sort of homecoming for M.S. Dhoni too. The batsman, who sealed the finals with a six against the same opposition, made sure he hit a swashbuckling boundary this time around, even as the stadium reverberated with chants of ‘Dhoni, Dhoni’, along with ‘Sachin, Sachin’.