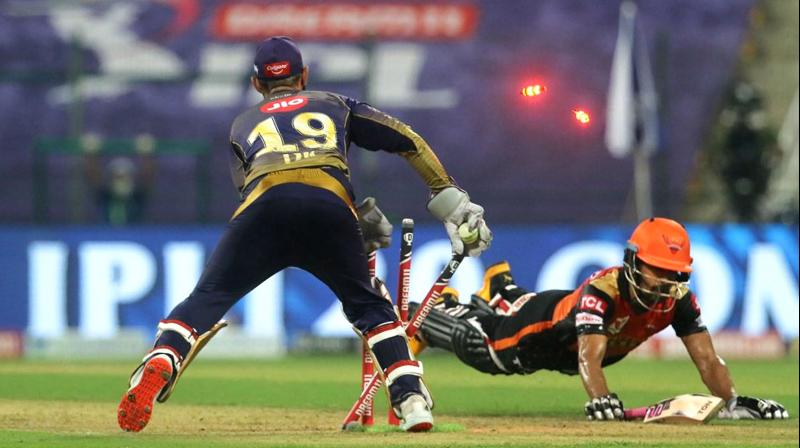 Unlike their last match against Mumbai Indians, KKR looked more intent and aggressive with their approach, having brought in Sunil Narine and Pat Cummins up front with the new ball. In this photo, Skipper Dinesh Karthik of Kolkata Knight Riders runs out Wriddhiman Saha of Sunrisers Hyderabad during their Indian Premier League 2020 cricket match at the Sheikh Zayed Stadium, Abu Dhabi, Saturday, Sept. 26,2020. (Photo | PTI)

Abu Dhabi: Kolkata Knight Riders put up a disciplined effort with Pat Cummins brilliantly spearheading the attack to restrict Sunrisers Hyderabad to a modest 142 for four in their IPL fixture here on Saturday.

Manish Pandey returned to form at No. 3 with a 38-ball 51 and along with Wriddhiman Saha (30 off 31 balls), tried to repair the damage but the duo were dismissed at the death and SRH lacked the finishing touch to settle for a seemingly below-par total.

Unlike their last match against Mumbai Indians, KKR looked more intent and aggressive with their approach, having brought in Sunil Narine and Cummins up front with the new ball.

Cummins smartly altered his length and bowled Jonny Bairstow with an absolute ripper to give KKR the first breakthrough.

In his second-coming, architect-turned mystery spinner Chakravarthy dismissed a well-set Warner (36 off 30) in a soft manner for his maiden IPL wicket, giving KKR the big breakthrough.

The Australian left-hander, who got out cheaply against Royal Challengers Bangalore, looked to make a mark with some clean hits, but a lapse in concentration did him in and he spooned a simple catch to Chakravarthy.

The two wickets meant that SRH could not step up the momentum and at the halfway mark, at 61 for two, the run-rate was just above six.