Australia are leading the charts with most runs, most wickets, most wins and highest individual score of the tournament. 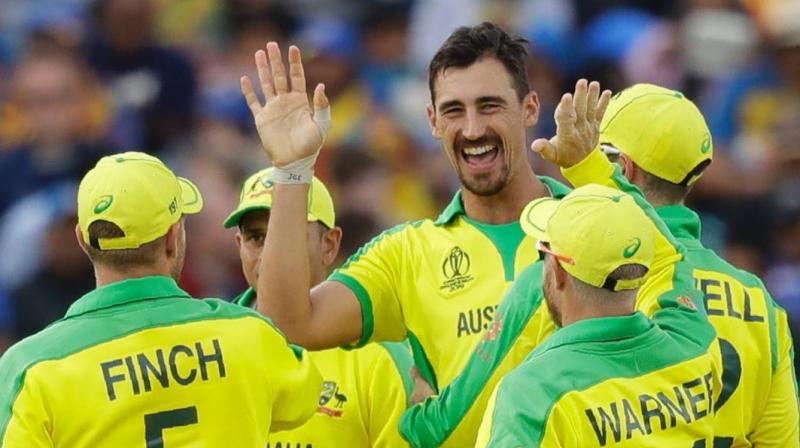 David Warner and Mitchell Starc have been grabbing all the headlines due to their stellar form lately. (Photo: AP)

Mumbai: Australia stormed into the semi-finals of the ICC World Cup 2019 after thrashing England by 64 runs on Tuesday.

The defending champions are the first team to book a semi-final berth at the ICC World Cup 2019. Australia has clinched eight points from seven matches of the tournament so far and justified their 'favourites' tag.

Australia lead with most runs, most wickets, most wins and the highest individual score of the tournament. Here are the four tournament stats in which they lead the race:

David Warner became the third Australian after Mathew Hayden and Ricky Ponting to score 500 runs in a single edition of the World Cup.

Aaron Finch is not too far away and has amassed 496 runs in the marquee event. Both, Warner and Finch are the two leading scorers in the World Cup 2019 and have consistently provided dominant starts for Australia.

The opening duo laid the foundation for Australia against England on Tuesday by adding a 123-run opening partnership on the board.

Highest score in an innings:

Warner and Finch have been the core of Australia's batting line-up so far and have concealed the flaws of the team's middle-order.

Warner also holds the record for the highest individual score in the tournament (166 runs), followed by Aaron Finch. (153 runs)

Apart from the batting order, Australia's bowling department has also been in scintillating form. Mitchell Starc, who currently is the top wicket-taker of the tournament with 19 wickets, disrupted England's batting line-up by taking four wickets.

He was accompanied by Jason Behrendorff, who clinched a five-wicket haul. Starc was also the joint highest wicket-taker in the 2015 edition of the World Cup with New Zealand's Trent Boult. Both settled with 22 wickets.

Australia are currently topping the points table having aqcuired 12 points from six matches. They have won most games in the tournament (6) so far.

The leading players' list reflects Australia's dominance in the tournament in both batting and bowling departments. Australia have certainly increased their chances of clinching successive World Cup trophies.

Australia will next face New Zealand at Lord's on June 29.