‘We still have lots of time to work’: Jadeja after warm-up match loss vs NZ

India were at 77 for the loss of five when Jadeja came out to bat. 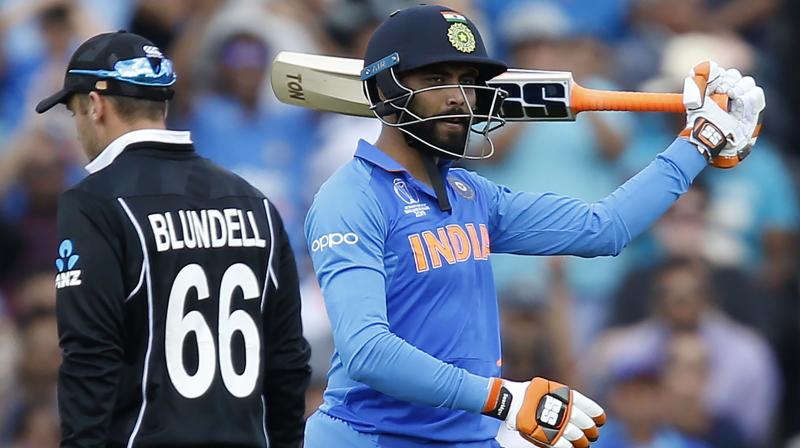 Ravindra Jadeja dragged his team to 177 for the loss of nine before losing his wicket. (Photo:AFP)

London: All-rounder Ravindra Jadeja on Saturday said that India still have a lot of time to work on its skills ahead of the ICC Men's Cricket World Cup, beginning May 30.

"When you play in England it is always difficult. You are coming from India and playing on flat, low bounce wicket. The wicket was a little bit spunggy today. We still have a lot of time to work on it. Nothing to worry! We will keep playing our good cricket. We just need little bit tunning and we will do that," Jadeja said after the match.

India lost to New Zealand by six wickets in the first warm-up match.

Talking about the conditions, the all-rounder said, "Conditions were a bit tough as it was typical English condition. The wicket was a bit soft in the first 15-20 overs but as the game progressed it was getting better and better. We are hoping that in the match we get a different wicket, not this much amount of grass on the wicket."

India were at 77 for the loss of five when Jadeja came out to bat. The India all-rounder dragged his team to 177 for the loss of nine before losing his wicket. Martin Guptill completed a screamer at point off Lockie Ferguson and Jadeja returned to pavillion for 54.

"Whenever I'll get a chance I'll keep performing for my team be it batting or bowling. I won't take pressure because it is World Cup as at the end of the day it is cricket. The way I've been playing I'll stick to that. I'll keep my thinking process simple," Jadeja added.

India suffered blows at regular intervals as Trent Boult and Jimmy Neesham did not let any Indian batsman settle in. The pace duo shared a total of seven wickets between them before Kiwi captain Kane Williamson and Ross Taylor chased down 179 with 77 balls to spare.

Reflecting on the manner of loss, Jadeja said, "This was our first game. You can't judge a player with one bad match. Everybody knows batting in England is a little bit tough so we as a batting unit are working more harder and focusing on our skills. It will come as everybody has a lot of experience."

"England has seaming condition that's why we opted to bat first. But had it been a tournament match, we would have read the conditions well and then took the decision. We wanted to perform in a tough situation. If you bat on this much grass wicket and going forward this much grass isn't there then it will easy for batsmen," he added.

India will next meet Bangladesh on May 28 in its second warm-up match at the Cardiff Wales Stadium.