This one’s for the little master

A stirring finish on the field and then the emotional lap of honour for Sachin, the cricketing demigod. 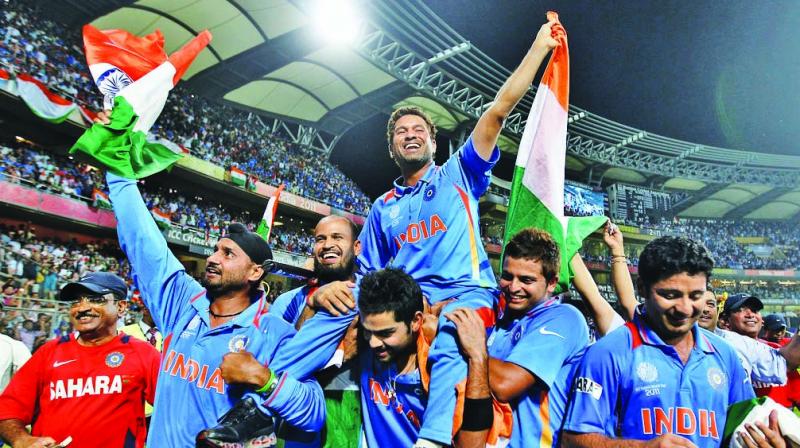 Sachin wept when carried around Wankhede Stadium on the young shoulders of Virat Kohli and Suresh Raina who were hardy out of their diapers when Tendulkar first played for India in 1989. Twenty-eight years after Kapil’s Devils had surprised the world at Lord’s, a second win came for a nation that had metamorphosed in that time into an aspirational economic powerhouse demanding a place in the sun. There was no Indian who would not have wished for its favourite cricketing son to be a member of a victorious World Cup team, more so since he had opted out for age out of the T20 Worlds four years earlier.

The format for 14 teams had been carefully vetted to avoid the Caribbean fiasco of 2007. India had ambled along in the league, looking none too efficient as in being involved in a tie with England and beaten by South Africa. Shrewd skipper MS Dhoni had covered up for all their inadequacies in appearing at all media conferences. His leadership skills were certainly required as India came into the quarter-finals against their old nemesis Australia. It was a replay of the 2003 final, except that Australia had lost stars to retirement. The one man who swung the tight game was Yuvraj Singh, at his competitive best in his 57*, after Ricky Ponting had done everything he could to keep his team afloat.

The Pakistanis had a surprise weapon in opener Mohammad Hafeez opening the bowling with his off spin (2-16 in 10 overs) against the West Indies and choking them. And do you know what the South Africans did against New Zealand — they choked. Long serving captain Graeme Smith said “I can’t explain it” and promptly announced his retirement from one-day cricket. And England, such a peppy team in the league, seemed to have suffered their old phobia of an extended tour of anywhere and consequent homesickness in a 10-wicket defeat at the hands of Sri Lanka in Colombo.

Preparations were already on for the semi-final at Mohali. The Army and Air Force got ready even as ant-ack ack guns were pushed into place. No fortress would have had such protection as the clash of the millennium took place. And Pakistan lost it, maybe just to keep in touch with the doomsday record against India. They dropped Sachin four times in comical ineptitude and contrived to keep snatching defeat from the jaws of victory as it were.

Sachin’s 100th ODI century would have been a phenomenal coincidence but it did not happen, but Raina’s quickfire 36 left Pakistan to chase 261, a task that was beyond them after Hafeez’s careless paddle shot he edged to Dhoni. Misbah-ul-Haq, defensive for too long, was alone in futile endeavor as India won for the fifth straight time against Pakistan in World Cups.

Having beaten previous World Cup winners in the quarters and semis, India came face to face with another in Sri Lanka at the Wankhede. A strange event at the toss meant the coin had to be flipped again and Sangakkara was adjudged the winner this time by the match referee and the Lankans prospered with the bat with Mahela Jayawardene making a most elegant century, the first three-figure knock in a losing cause in a final. The Indians made the highest score in a World Cup final in the chase.

Who can forget Dhoni taking a gamble in walking in ahead of Yuvraj and staying to the end to hit that immemorable six, the flight path of which he followed until the white ball faded into the stands at night. A stirring finish on the field and then the emotional lap of honour for Sachin, the cricketing demigod.