Smith scored a century in Australia’s 12-run win over England in a warm-up game in Southampton, continuing his run of good form. 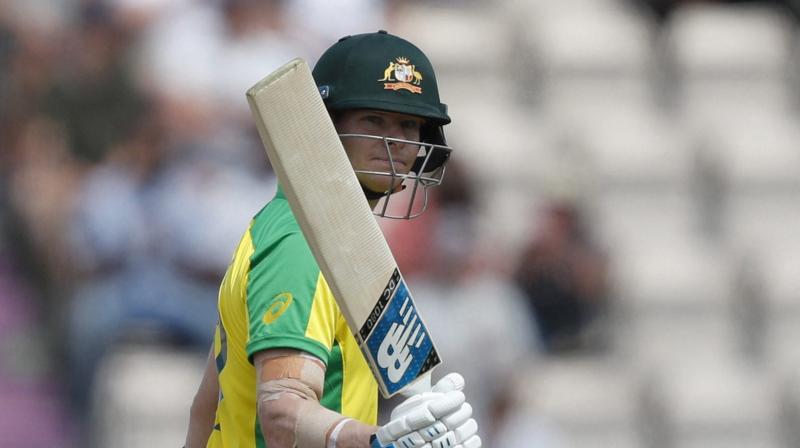 Smith scored 89 not out and 91 not out against New Zealand in warm-up games in Brisbane earlier this month before scoring 116 from 102 balls on Saturday. (Photo:AP/PTI)

London: Chants of “cheat” accompanied Steve Smith as he came out to bat against England on Saturday but the Australia batsman was unfazed by the hostile reception and says he is focused firmly on maintaining his form ahead of the Cricket World Cup.

Smith, who was stripped of the captaincy and served a 12-month ban for ball-tampering, scored a century in Australia’s 12-run win over England in a warm-up game in Southampton, continuing his run of good form since returning to the side.

The 29-year-old scored 89 not out and 91 not out against New Zealand in warm-up games in Brisbane earlier this month before scoring 116 from 102 balls on Saturday.

Prior to his ban for his role in a ball-tampering scandal during a test series against South Africa, Smith had scored 383 runs in 15 one-day internationals innings at an average of 29.46, well below his career average of 41.84.

“I was actually a little bit disappointed with my one day form (before the ban),” Smith told reporters. “So it was nice to spend a bit of time in the middle.

“But I’m not reading too much into it. They are just practice games but hopefully I can keep up the form as we head into the real stuff.

“I am feeling composed and calm at the crease and hitting the balls I want to, to the boundary. Hopefully I can keep it up.”

Smith’s composure did not slip even when the home crowd heckled him over the ball-tampering scandal.

“I heard a few things when I went out to bat but it didn’t get to me,” Smith said.

“I guess everyone is entitled to their opinion in how they want to treat people but it’s just water off a duck’s back to me. I was just trying to keep my head down, move straight ahead and do my job.”

Smith, who played mostly in domestic Twenty20 tournaments around the world and some club cricket in Sydney before his ban ended in late March, had elbow surgery earlier this year and he said it was still on the mend.

“The elbow is coming along pretty well,” Smith said. “I haven’t really had to test it yet throwing-wise.

“I’d say I’m about 80 percent throwing-wise but I’m hoping it can progress a little bit more in the week leading up to the World Cup.”

Smith added that the injury would not affect him bowling his legpsinners if required during the tournament in England and Wales.

Five-times champions Australia face Sri Lanka in their final warm-up match in Southampton on Monday before their World Cup opener against Afghanistan in Bristol on June 1.