Prithvi Shaw smashed six boundaries, three sixes and was involved in the match-winning partnership of 114 runs with Swapnil Salvi. 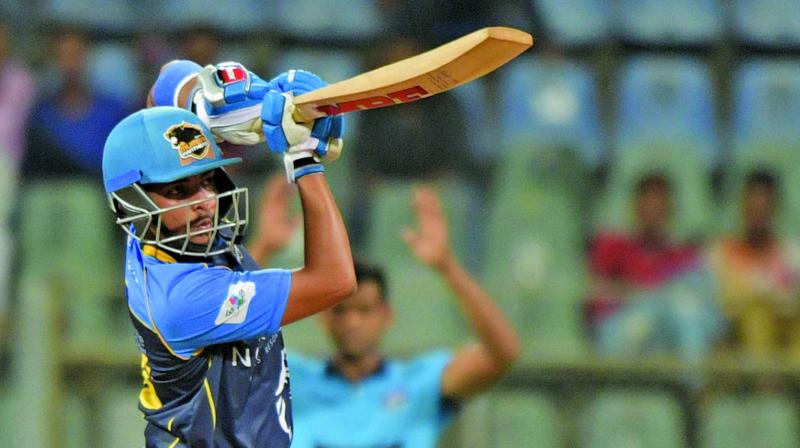 Man of the Match Prithvi Shaw in action at the T20 Mumbai League 2019.

Skipper Prithvi Shaw set up a stiff chase with 76 runs from 48 balls to star in a two-wicket win for North Mumbai Panthers over ARCS Andheri in the first semi-final of the T20 Mumbai League at Wankhede stadium here on Friday night.

Shaw smashed six boundaries and three sixes and was involved in the match-winning fourth-wicket partnership of 114 runs with Swapnil Salvi to ensure a maiden entry into the final after a last ball thriller.

On a night that was dominated by top-order batsmen, opener Herwadkar’s quickfire start and Ranjane’s late flourish gave ARCS a fighting total of 166 for 6. But thanks to captain Shaw and Salvi’s partnership, the Panthers recovered after early blows. Despite neither of the set batsmen seeing the team through, injured all-rounder Atif Attarwala’s six off Ankur Singh tied the total. However, the southpaw’s dismissal off the next ball meant Pravin Tambe had to score a single to see the team through. And Tambe, who had earlier got rid of Herwadkar with a googly to get his team back in the match, did the needful with a boundary of the last ball to burst into celebrations.

When Salvi joined Shaw in the middle in the eighth over, the Panthers were reduced to 40 for three. Had Shaw not been dropped on 31 in the next over, Salvi would have had a monumental task ahead of him. But the stylish Shaw made ARCS pay dearly with a fifty. The ARCS fielders were found guilty again as Shaw was dropped on the boundary line on 66. The two lapses turned out to be the difference between the teams in the end.

Earlier in the evening, ARCS sprung a surprise by changing their batting order. And the ploy of promoting Iqbal Abdulla (27) worked to an extent as he rotated the strike with Herwadkar pulling and driving the ball at will. However, Herwadkar’s dismissal in the 16th over pegged the ARCS back. Since Ranjane’s three hits to the fence, including a six, the ARCS couldn’t find the boundary. The last-ball six helped Ranjane complete his second  fifty of the season but it wasn’t enough for ARCS eventually.