While the rest of the team travelled to Bengaluru for their next match against RCB, Bumrah stayed back in Mumbai. 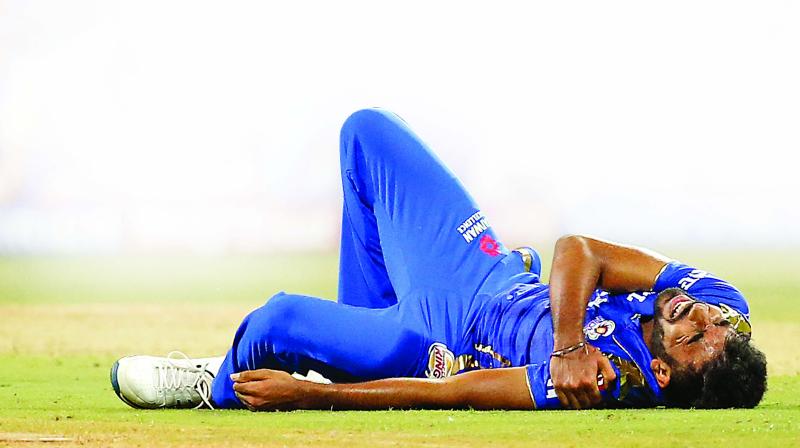 Mumbai: Mumbai Indians coach Mahela Jayawardene had hoped for an injury-free season just ahead of the opening match but they got a big scare on Sunday as their premier bowler Jasprit Bumrah hurt his left shoulder after falling over in his follow-through in an attempt to save run on the last ball of the Delhi Capitals innings at the Wankhede Stadium.

While the rest of the team travelled to Bengaluru for their next match against RCB, Bumrah stayed back in Mumbai.

“His recovery is on track and fortunately no sign on stress,” a statement from Mumbai said.

The  Mumbai franchise are already fretting over the arrival of three foreign pacers Lasith Malinga, Adam Milne and Jason Behrendorff. Milne is injured while Behrendorff is currently part of Australia ODI squad against Pakistan though he hasn’t featured in first two ODIs.

MI are hoping Malinga can come over for few games before going to play in Sri Lankan domestic tournament and then return. Hardik Pandya has also just returned from an injury.

Now, injury to Bumrah will give them sleepless nights ahead of their next game against Royal Challengers Bangalore on Thursday. Bumrah didn’t have the best day with the ball going for 10 runs per over but he executed a perfect Yorker on the last ball dug out by Rishabh Pant. The fast bowler attempted to intercept the ball with his left hand, but fell flat on the ground grimacing in pain while holding his left shoulder.

Mumbai captain Rohit Sharma, Pant and other players were around him straightaway. Mumbai physiotherapist Nitin Patel oversaw his walk to the dressing room and Bumrah was holding his shoulder.

Bumrah didn’t come back to bat as Mumbai Indians needed an improbable 38 runs in last four remaining balls after Mitchell McClenaghan was out.

However, Mumbai Indians management ruled out any major injury concern to  Bumrah after the match saying, “Bumrah had a slight jerk on his left shoulder and he has recovered well. We will be assessing him and
monitor his progress.”

But not only MI management but BCCI and cricket fans will have fingers crossed on the fitness of Bumrah who is the strike bowler not only for his franchise but India as well. He is going to be key for India in England during the ICC World Cup which is just two months away.

The franchise is in touch with Indian team management and injury updates are being given to team India physio Patrick Farhat.

The relief is that no damage has been done to bowling arm but as a precautionary measure it may limit his appearances for MI further this season to keep him fresh for the World Cup.