“This one (was special), because my father was in the crowd. So this one’s for him. He loves India,” Wyatt said after her exhilarating knock. 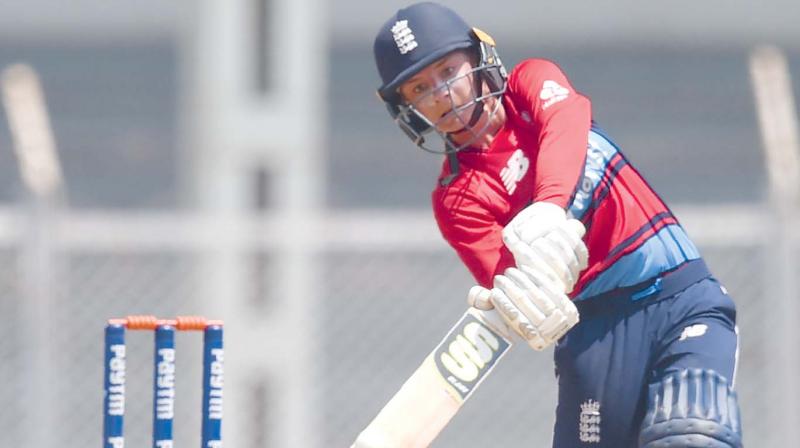 England’s Danielle Wyatt in action in their women’s Twenty20 tri-series match against India at the Brabourne Stadium in Mumbai. (Photo: AFP)

Mumbai: When Danielle Wyatt came on to bat here on Sunday, she wanted to impress “someone special” in the crowd. And she did that in style, hitting a power-packed 64-ball 124 that helped England complete a record chase of 199 with a seven-wicket victory over India in a T20 tri-series match here on a warm and a humid Sunday.

“This one (was special), because my father was in the crowd. So this one’s for him. He loves India,” Wyatt said after her exhilarating knock.

India raised a mammoth 198/4 following half centuries from Smriti Mandhana and Mithali Raj, but Wyatt decimated the Indian attack single-handedly guiding England to victory in just 18.3 overs. She smashed 15 fours and five sixes as the home bowlers had a tough time. Apart from Jhulan Goswami and Deepti Sharma, no other bowler had an economy rate of below 10 per over.

England won the toss and elected to field. The hosts responded in style with Mandhana (76) and Raj (53) putting up 129 runs (77 balls) for the opening wicket to lay the platform for a big total. Harmanpreet added 30 to take India to 198/4.