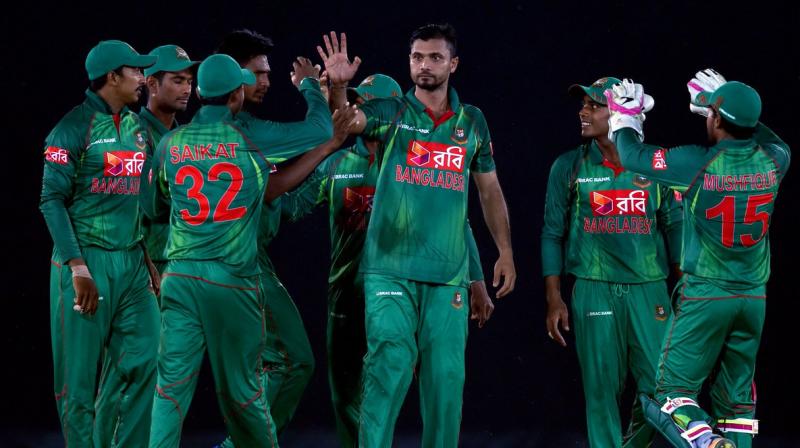 Sri Lanka never threatened to chase down the total, and was bowled out for 234 in the 46th over. (Photo: ICC)

Asked to bat first after winning the toss at Rangiri Dambulla Stadium, Bangladesh scored a challenging 324-5, its third highest ODI total ever.

In reply, Sri Lanka never threatened to chase down the total, and was bowled out for 234 in the 46th over.

After only its second ODI win in Sri Lanka, Bangladesh could clinch a first series win there on Tuesday in the second ODI at the same ground.

"That was almost a perfect game for us," Bangladesh captain Mashrafe Mortaza said.

He said the lineup was probably the best ever fielded by Bangladesh.

"We bowled bad, and in the field we gave away 20 to 30 runs extra," Tharanga said. The lack of partnerships was also costly, he added.

Dinesh Chandimal top-scored with 59, and Thisara Perera showed glimpses of fight late in the innings with an aggressive 55.

Iqbal hit a six and 15 boundaries during his 142-ball knock of 127. He added 90 runs for the second wicket with Rahman, who made 54 off 56 deliveries. Rahman hit 10 boundaries before Tharanga took a sharp catch at extra cover off seamer Asela Gunaratne.

Bangladesh quickly lost another wicket for 120-3 but Iqbal and Shakib reacted by combining for the best partnership of the innings: 144 runs for the fourth. Shakib made 72 off 71 balls including a six and four boundaries.

Bangladesh got some much-needed acceleration in the final overs from Mosaddek Hossain and Mahmudullah Riyad. Bangladesh scored 68 runs off the last five overs as the Sri Lanka bowlers struggled with their direction, combined with sloppy fielding.