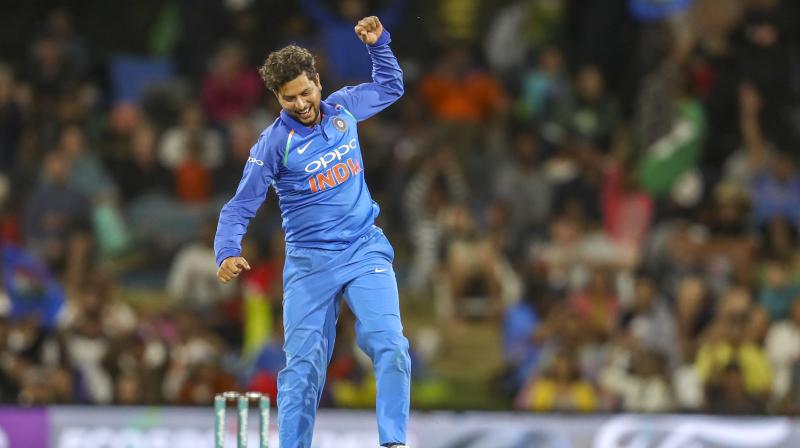 Kuldeep claimed consecutive wickets of Henry Nicholls and Ish Sodhi in the 31st over, as he polished off the New Zealand innings in a burst of three overs. (Photo: AP)

Opting to bat, India piled up a challenging 324 for 4 riding on Rohit Sharma (87) and Shikhar Dhawan (66)'s fluent half-centuries. There were significant contributions from captain Virat Kohli (43), Ambati Rayudu (47) and Mahendra Singh Dhoni (48 not out).

Kedar Jadhav contributed a quickfire 22 not out off just 10 balls as he and Dhoni added 53 runs in final 4.2 overs for the unconquered fifth wicket.

The visiting bowlers then shot New Zealand out for 234 in 40.2 overs as India scored a comprehensive win to celebrate the country's Republic Day in style.

Kuldeep (4/45 in 10 overs) and Chahal (2/52 in 9.2 overs) shared bulk of the spoils. Ditto in the opener, Kuldeep took four wickets while Chahal accounted for two.

The home side batsmen offered very little resistance to save Doug Bracewell, who top-scored with 57.

Kuldeep claimed consecutive wickets of Henry Nicholls and Ish Sodhi in the 31st over, as he polished off the New Zealand innings in a burst of three overs.

Chasing a stiff target of 325, New Zealand lost their top four batsmen, including skipper Kane Williamson (20) and senior pro Ross Taylor (22), by the 18th over when they touched 100-run mark.

The Kiwis were denied a strong start with Bhuvaneshwar Kumar (2/42) and Mohammed Shami (1/43) bowling with a lot of discipline.

Opener Martin Guptill (15) was the first to go off Kumar after two lucky escapes but New Zealand were dealt a heavy blow when captain Williamson was out in the eighth over after a promising start.

The Kiwi captain hit Shami for two consecutive sixes and a boundary in the eighth over before chopping the fourth delivery onto his stumps.

Taylor, who has an impressive record against India, and opener Colin Munro dealt in singles for a few overs but India got another breakthrough. Munro went for a switch-hit off a Chahal (2/52) delivery only to miss it completely and was adjudged leg before.

New Zealand were in deep trouble when Taylor was dismissed via an excellent effort by veteran wicketkeeper Dhoni, who whipped off the bails after Chahal beat the batsmen with his drift. Taylor thought he was in but replays showed his feet was not grounded when Dhoni completed formalities in a flash.

A run glut followed before Kuldeep wrapped up the New Zealand innings with a four-wicket burst. First, he had Tom Latham (34) trapped leg before in the 25th over and then had Colin de Grandhomme (3) two overs later to reduce New Zealand to 146 for 6.

Kuldeep returned in the 31st over to dismiss Nicholls (28) and Sodhi (0) off consecutive deliveries to end the New Zealand innings.

Earlier, Rohit missed out on a chance to hit his first one-day hundred in New Zealand but India managed a stiff 324 for 4 with all the batsmen coming good.

Rohit and Dhawan gave India a flying start with a 154-run opening stand from 25.2 overs during which the New Zealand bowlers were hit all over the park.

Rohit, on the other hand, looked set for a century as he was batting beautifully but in the end, fell short of the three-figure mark by 13 runs.

Paceman Lockie Ferguson (2/81), who was generating a lot of pace, removed the dashing Indian batsman, who failed to put down a pull shot off a slower ball, in the 30th over. Rohit had nine boundaries and three sixes in his 96-ball innings.

One-down Kohli and Rayudu did not give any respite to the Kiwi bowlers as the duo stitched 64 runs for the third wicket from 9.4 overs.

Kohli was in his imperious touch as long as he was at the crease before he became Boult's second victim in the 40th over.

Dhoni and Jadhav added 86 runs in the final 10 overs. Dhoni hit five boundaries and one six in his 33-ball unbeaten knock.