The dangerous Boult missed the first Test in Perth with a rib injury that also kept him out of their final clash against England. 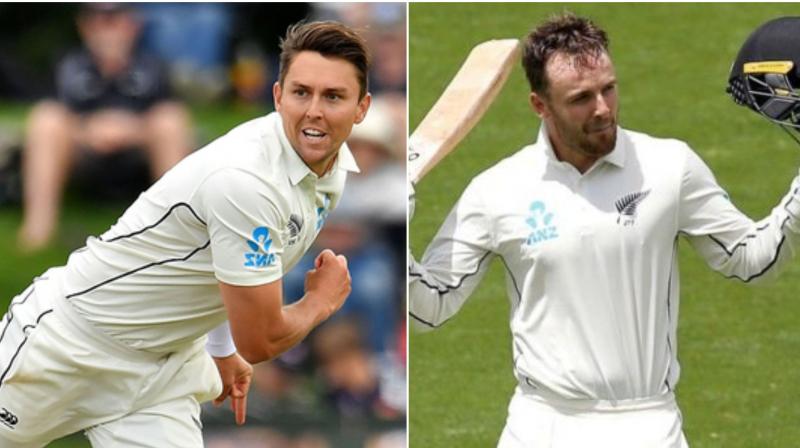 New Zealand made two changes Wednesday for the Boxing Day Test against Australia with fast bowler Trent Boult back from injury and Tom Blundell replacing Jeet Ravel at the top of the order. (Photo:AFP)

Melbourne: New Zealand made two changes Wednesday for the Boxing Day Test against Australia with fast bowler Trent Boult back from injury and Tom Blundell replacing Jeet Ravel at the top of the order.

The dangerous Boult missed the first Test in Perth, where his team crashed by 296 runs, with a rib injury that also kept him out of their final clash against England.

But he has worked his way back to fitness, desperate to play in the Black Caps first Boxing Day Test at the Melbourne Cricket Ground since 1987, with a crowd of more 75,000 expected on day one.

Williamson also confirmed Blundell, usually a middle-order batsman, would open alongside Tom Latham in place of the out-of-form Ravel.

"He's a positive player and a smart cricketer so it's just trying to adapt to the conditions. It's important he goes out and plays his natural game," Williamson told reporters of Blundell.

"He's been a very good player for a long time and he's a mature head ... it's a really exciting opportunity for him."

New Zealand have had 10 days to recover from their Perth day-night Test thrashing, which saw their batsmen skittled for 166 and 171.

Williamson said they had learned from their mistakes.

"Perth was tough and Australia are very good and tactically sound," he said after his team were put through their paces in the nets on Christmas Day.

"It's important we learn from some bits of Perth but turn our focus to Melbourne and changing conditions and perhaps not be too reactive to that performance."

Williamson was also keen to ensure his players do not get carried away with playing in front of such a big crowd during one of the most prestigious days on the cricket calendar.

"I guess there's a sense of romance about being involved in the Boxing Day Test ... at the same time it's about removing a little bit of that and bringing the focus back to the cricket and making those improvements we need to."