India fast bowlers in the pink after debut day-night Test

Skipper Virat Kohli has been all praise for his pacemen and said workload management was the key to keeping them in top shape. 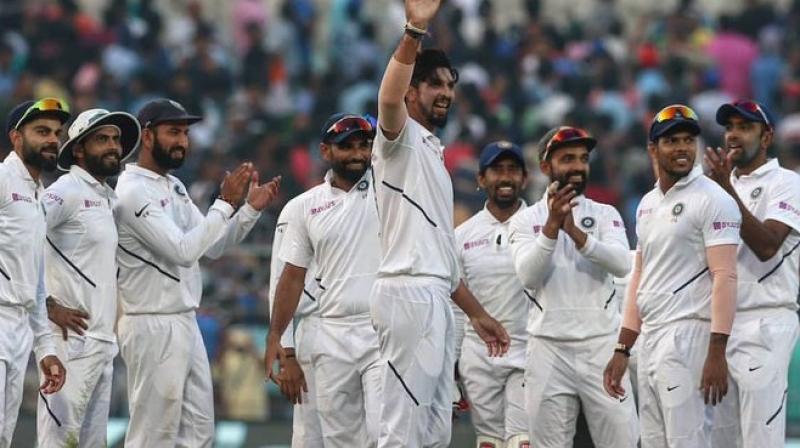 In the first pink-ball Test for both sides, India beat Bangladesh by an innings and 46 runs in just over two days to sweep the two-match series. (Photo:BCCI)

Kolkata: India's fast bowlers are enjoying a rare moment in the sun after they combined to dismantle Bangladesh in the maiden day-night Test on Indian soil.

Ishant Sharma, Umesh Yadav and Mohammed Shami took all 19 Bangladesh wickets to fall in Kolkata, a rarity on the sub-continent's pitches where spinners usually rule.

It surpassed the record 17 wickets taken by pacemen in a home Test in 2017 against Sri Lanka, also at Kolkata's Eden Gardens.

In the first pink-ball Test for both sides, India beat Bangladesh by an innings and 46 runs in just over two days to sweep the two-match series.

"It was always on the cards that India's pacers would call the shots, but Bangladesh have to be disappointed at the lack of application and fight shown by their batsmen," former India batsman VVS Laxman wrote in The Times of India on Monday.

Skipper Virat Kohli has been all praise for his pacemen and said workload management was the key to keeping them in top shape.

"They gained more experience, now they're bowling well together," Kohli told reporters after India sealed the one-sided win on Sunday.

"They take ownership of their own preparation, their own fitness and communication is very clear... We want you fresh for Test cricket, don't worry about anything else.

"And they feel secure as well that if they don't play, we have back-up bowlers to come and do the job as well. So that bench strength is also helping us a lot."

The three quicks have been on a roll despite the absence of yorker specialist Jasprit Bumrah, who is recovering from a stress fracture of the back.

Shami and Yadav took 24 wickets between them in India's 3-0 Test whitewash of South Africa last month.

Spinners Ravichandran Ashwin and Ravindra Jadeja bowled a total of just seven overs against Bangladesh, who fell for 106 and 195."Doesn't happen often in India when the spinners hardly roll their arm over in the test match," Indian fast bowler Irfan Pathan wrote on Twitter.

However, the real test for the Indian quicks will come in January and February, when India will play two Tests in seamer-friendly New Zealand.