Coach Ramesh Powar, captain Harmanpreet Kaur and selector Sudha Shah justified this by saying that they didn't want to change a winning combination. 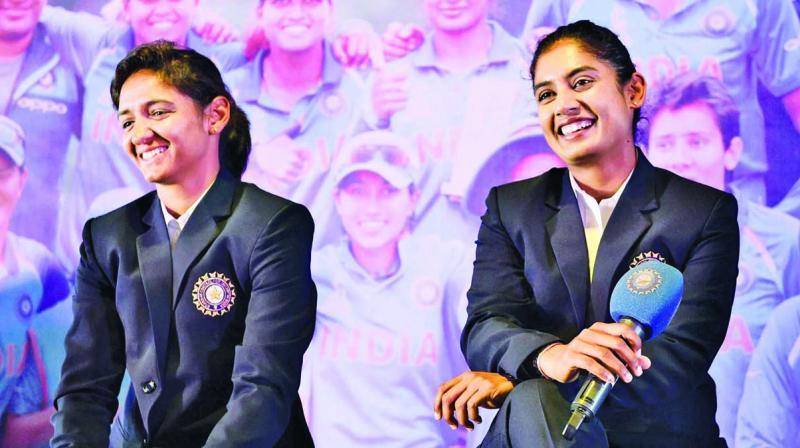 Friday was a dampener in more ways than one. The women's cricket team crashed out of the World T20 tournament, and later the men’s T20 international against Australia was abandoned because of rain with India in a strong position.

Both Indian fans and players would have liked if it had rained at Antigua and not in Melbourne to prevent this unexpected double whammy. Only if wishes were horses!

India had stormed into the semi-finals of the World Cup undefeated in four matches, raising hopes of a title win. In the event, the surrender was hugely disappointing.

Eyebrows were raised when Mithali Raj was omitted from the playing Xl and turned into a furore — multiplied manifold by social media — by the time the match was completed.

Coach Ramesh Powar, captain Harmanpreet Kaur and selector Sudha Shah justified this by saying that they didn't want to change a winning combination.

The prerogative of the team management notwithstanding, Mithali’s non-selection was baffling.

She had looked in good touch and had a couple of half centuries to her credit. Moreover, her experience could have been crucial in an important fixture as is adequately highlighted in men's cricket.

The semi-final is a knock out match, a do-or-die situation, in which a mature head and strong nerves, which years of playing help develop, can be the clincher.

There is no way of knowing whether India would have won had Mithali played, but it is reasonable to assume that the batting, which let the team down badly, may have performed better.

Nevertheless, whatever the merits or otherwise of the decision to drop Mithali, the vitriolic outburst by her manager Annisha Gupta against Harmanpreet calling her “manipulative, lying, immature and undeserving captain” was unwarranted.

It betrayed churlishness that Mithali would be unhappy about I would imagine, and added grist to the mill that everything is not hunky-dory in the dressing room of the women’s team.

This is something that authorities need to address swiftly. Better still if Mithali and Harmanpreet square up and resolve conflicts if indeed they exist. Any malingering on the matter can only make it worse.

However, even if ruffled feathers are smoothened out, it does not guarantee India will win important title. (For the record, the women’s team has lost five semis and two finals as yet). The crux of the matter is how well women's cricket is structured.

This was brought out succinctly by former Aussie captain Mel Jones, who tweeted after India's defeat:

“As good as India/WI were up to the semis, the two teams (England and Australia) with the strongest grassroots development/pathway programs, longest contract systems and strategic vision are through to the final.”

That should be food for thought for BCCI.

Meanwhile the men's team, dogged by rain-laden ill-luck, is on the precipice of losing the T20 series against Australia.

In the first match, Kohli & Co were left to chase more runs than the rivals had scored thanks to Messrs Duckworth, Lewis and Stern — failing by a whisker 0ù and the second match was abandoned because of heavy rain with a seemingly gettable target to overcome. Meddlesome weather, however, is part and parcel of the game which the Indians will have to take it in their stride. On the field, there is not much the team has done wrong.

K L Rahul's form has been iffy and the fielding has been below par, but the splendid recovery by rookies Krunal Pandya and Khaleel Ahmed, who were profligate in the first match, augurs well for the future.

More importantly, Bhuvaneshwar, Bumrah and Kuldeep seem to have adjusted to the conditions superbly, which is a big plus for the Test series that follows the T20s.

Keeping the Tests in mind, the last T20 game is crucial. A series defeat would lift the morale of the Aussies, who've been swirling in turmoil for some while now.

That is precisely what India wouldn't want.