If we win this game we deserve to qualify, says Aditya Tare

Mumbai skipper urges seniors to step up for the do-or-die match. Parkar likely to replace dropped Nayar in playing XI. 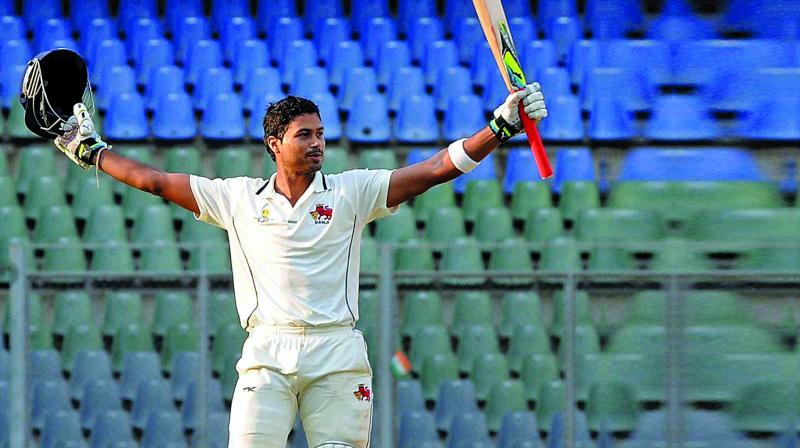 Mumbai have won just two points in two home games and they will have to change that to progress further. (Photo: File)

Mumbai have had an inconsistent Ranji Trophy campaign thus far and have been poor at home but the 41-time champions know how to raise the game at crucial times.

They will require nothing less than a win to progress into the quarter-finals as they take on Tripura in the last Group C match at Wankhede stadium from Saturday.

“It is a must win game. We are aware of the situation. One positive thing is it is in our hands. We don’t depend on any other result. If we win this game we deserve to qualify. If we don’t, we do not deserve to qualify. As simple as that,” Mumbai skipper Aditya Tare said after the practice session on Friday.

Mumbai have won just two points in two home games and they will have to change that to progress further. They have 14 points overall from five games while Andhra top the group at 19 points after finishing league engagements.

“We played three away games and we fared pretty well. We could not get enough points from two home games. Had we got the lead in either of those games we would have been in a better position,” he added.

Tare didn’t seem happy with Abhishek Nayar's sacking ahead of the crucial game but said they have an all-rounder as his replacement and hoped senior players like Suryakumar Yadav will step up. “He is obviously the most experienced guy in the team. Unfortunately, he was dropped. Can’t help it. We have to move on and try and play the best we can. We will miss his experience, but we have got quality in the team… someone will play his role,” Tare said.

“Seniors have to step up and take youngsters along. This is how you win matches and Ranji Trophies. We have got an all-rounder in our team so it is not that we are missing that aspect in our team. So that might be a direct replacement,” he added.

Mumbai face an unknown opposition in Tripura, who they haven't played in the recent past at least.

“I don’t think we have ever played them. at least I have never played Tripura. So we might take more time adjusting to their players but if we do our things correctly, we will be able to achieve the result we want,” Tare said.

Prithvi Shaw has been in form at the top with three centuries in four games. But his opening partners have changed frequently. Left-handed opener Akhil Herwadkar who scored a hundred against Tamil Nadu at BKC is likely to get the nod ahead of Jay Bista. If Shaw has been good in first innings, Shreyas Iyer has been more fluent in second innings barring an off game against Baroda at the same venue.

Yadav has been inconsistent in the middle order and Tare is yet score big but Siddhesh Lad has been their main rescue man. With Nayar dropped, Parkar has to step up as the veteran contributed both with bat and ball since the last decade.

Shardul Thakur has been brilliant occasionally and has tested batsmen with breathtaking spells. Dhawal Kulkarni has been improving after a mixed start to the season. Mumbai haven’t got a consistent spinner after left-arm spinner Ankeet Chavan was banned.

Vijay Gohil and Akash Parkar have been in and around before Karsh Kathori was handed his debut in the last game. Minad Manjrekar is likely to continue as the third seamer.

No pressure on Tripura

Tripura are currently at the bottom of the Group C table with four points and have no chance to qualify for the quarter-finals. They will be under no pressure to take on giants Mumbai. Most of them have never played in Mumbai and will relish playing at Wankhede stadium.

“We are in an advantageous situation. We don’t need to qualify. They’re the ones who’re under pressure, not us. We’ll just look play our normal game,” Tripura skipper, Manisankar Murasingh said.

He admitted playing against Mumbai who will go for the kill won’t be easy. “It’s a tough game for us, we’ve never played them before. They’re the 41-time champions. We’ve lost just one match so far, and drawn all the others. We’ll carry that positive factor confidence here,” he added.

A good performance here like Jammu and Kashmir a couple of seasons ago will go a long way in developing cricket in the North Eastern state and perhaps fetching IPL contracts for a few players as they have been playing mostly away from the limelight. “Playing in this kind of a group is important for us. If we do well here, then our players will have some scope to play in the IPL,” the Tripura skipper said.

Tripura has some outside players who are experienced at this level and can trouble Mumbai. Former Services player Yashpal Singh has over 8,000 runs at first-class level and he will be key in batting along with wicket-keeper batsman Smit Patel, who is from Gujarat. Punjab all-rounder Gurinder Singh is their other outside player.