His team not only lost, Kohli himself dropped two crucial catches off Rahul’s bat following which the Punjab captain scored 132 of 69 balls. 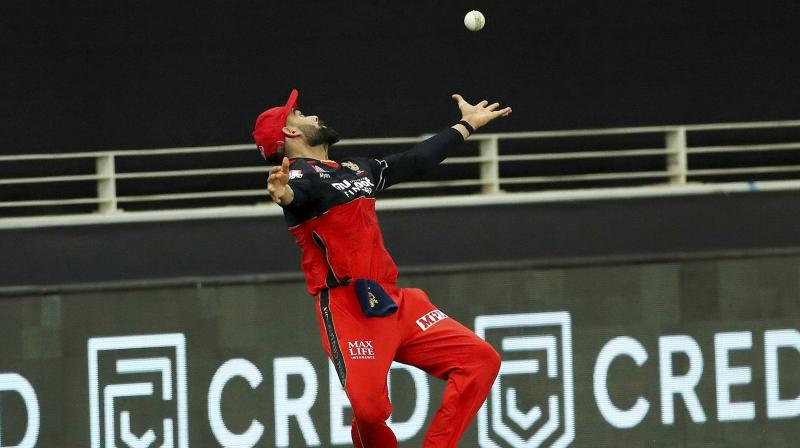 After dropping two catches, RCB skipper Virat Kohli, undoubtedly one of the best when it comes to run-chasing, failed with the bat, managing just a run off five balls before he was caught off a Sheldon Cottrell delivery. (Photo | PTI)

Dubai: Kings XI Punjab knocked the stuffing out of Royal Challengers Bangalore in its IPL win Thursday, with skipper K L Rahul’s sublime hundred being the highlight of an all-round performance, while his counterpart Virat Kohli had one of the worst days ever.

His team not only lost, Kohli himself dropped two crucial catches off Rahul’s bat following which the Punjab captain scored 132 of 69 balls — setting two new records, for recording the highest score by an Indian in the IPL and for also becoming the fastest Indian to score 2,000 IPL runs. Rahul achieved the feat in 60 innings, smashing Sachin Tendulkar’s record of 2,000 runs 63 innings.

With the captain having played the biggest role, Kings XI Punjab defeated Royal Challengers Bangalore by a whopping 97-run margin.

Opening the innings, Rahul punished the RCB bowlers into submission to help KXIP to a daunting 206 for three before the bowling attack put up a disciplined effort to bundle Virat Kohli’s side for 109 with three overs to spare.

With his spectacular knock of 132, with 14 boundaries and seven sixes, Rahul surpassed Rishabh Pant (128 in 2018) to post the highest individual score by an Indian and a captain in IPL history.

It was a rather forgettable performance from RCB after the win against Sunrisers Hyderabad in their tournament opener. For KXIP, the win came after a super-over loss against Delhi Capitals.

RCB were in all sorts for trouble from the beginning of the run chase with Devdutt Padikkal (1) and Josh Philippe (0) returning to the dugout in the first two overs.

After dropping two catches, Kohli, undoubtedly one of the best when it comes to run-chasing, failed with the bat, managing just a run off five balls before he was caught off a Sheldon Cottrell delivery.

Opener Aaron Finch (20) was then joined in the middle by AB de Villiers (28). The duo looked dangerous, milking deliveries wherever possible. The two added 49-runs before the young Ravi Bishnoi broke the stand by getting rid of the Australian limited overs captain.

Bishnoi (3/32) and Murugan Ashwin (3/21) dismissed Finch and de Villiers in quick succession with RCB reeling at 57 for five. Washington Sundar was the top scorer for RCB, hitting 30 off 27 deliveries.

Ashwin was the pick of the bowlers for KXIP, he picked up three wickets giving away 21 runs. Bishnoi too claimed three wickets and was impressive once again. Cottrell (2/17), Mohammad Shami (1/14) and Glenn Maxwell (1/10) too bowled economical spells.

Opening the batting with Rahul, Mayank Agarwal (26) looked menacing and shared a 57-run stand with his captain. However, with the introduction of spin into the attack in the seventh over, Yuzvendra Chahal (1/25) struck with the last ball, cleaning up Agarwal (26) with a delightful googly.

Nicholas Pooran (17) and Glenn Maxwell (5) once again failed to make an impact as Shivam Dube (2/33) finished off the duo. Karun Nair pitched in with an eight-ball 15.

All players wore black armbands to honour Australian cricketer turned commentator Dean Jones, who died in Mumbai due to a cardiac arrest on Thursday.