In the 2000s, they were one of the most feared teams in the world; and, going on a tour of South Africa during those times was a challenge. 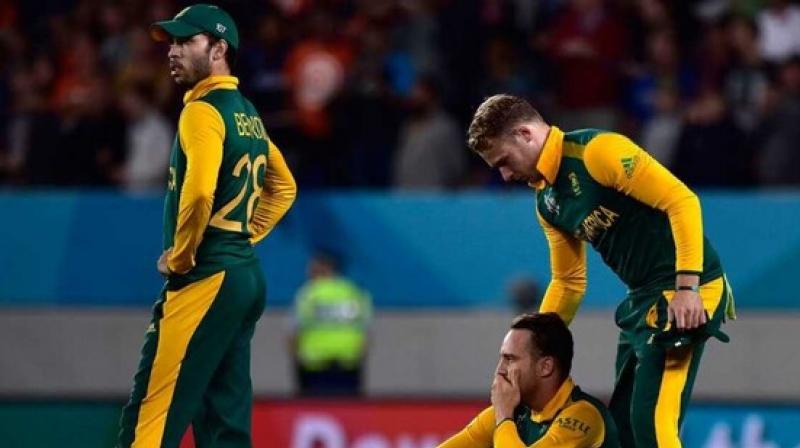 In the 2015 World Cup, they had to suffer a heartbreaking defeat in the semi-finals by the hands of New Zealand. (Photo: AFP)

Mumbai: The South African cricket team has been one of the most dangerous cricket teams for the past 25 years. Only the Australian national team has a better win-loss record than them. In the 2000s, they were one of the most feared teams in the world; and, going on a tour of South Africa during those times would be a challenge that most teams would run away from.

But now, when you think about the South African cricket team, they seem totally harmless and easily defeatable. They are no more the fearless lions from the continent of Africa. Their utterly disappointing run in the ICC World Cup 2019 did not do much good to their reputation. In the ICC 2015 World Cup too, they had to suffer a heartbreaking defeat in the semi-finals by the hands of New Zealand.

The African nation’s end of an era had begun with the retirement of AB de Villiers. After the World Cup, JP Duminy, Imran Tahir and Hashim Amla announced their retirement from international cricket. Dale Steyn, too, has announced his retirement from Test cricket. One by one the golden era of South African Cricket is coming to an end.

The main problem with this era coming to an end is the laziness with which their cricketing board, Cricket South Africa (CSA), has failed to find able and talented replacements for these veterans. The youngsters who were given a chance also didn’t live up to the mark.

More than half the squad is on the wrong side of 30 and have at most 3-4 years of playing time left in them. In these times of crisis, the board should be on the lookout for future stars to replace those who will retire.

Previously, the South African cricket team had multiple gems in their squad which made them formidable. But in the last few years, the team used to revolve only around AB de Villiers. He was the one who used to perform most of the time, taking the entire team on his shoulders. The all-rounder department is also a major blemish on the current squad, with JP Duminy being the last great all-rounder that South Africa have produced.

Another problem which is faced by the South Africans is Kolpak. Lots of talented cricketers have signed Kolpak deals with English county cricket. The biggest reason for this is that the lucrative deal offered by county cricket is much higher when compared to their contract with the CSA.

A Kolpak deal is a deal signed by the cricketers which allow them to sign contracts with English county sides without having to be fielded as an overseas player.

According to the Kolpak ruling, cricketers are prohibited from playing for their country at the same time as their contract with the county. Because of this, a huge number of talented cricketers from South Africa have flooded to England for the county contract. Since 2004 the number of players that have accepted the Kolpak deal is 60, and about 42 of them are from South Africa.

The CSA should follow the way of other cricketing nations like India, England and Australia, who have been performing admirably with their experienced players, but they also haven’t failed to nurture young talent. If they follow their footsteps only they can dream about putting South Africa back to their golden period.

There needs to be a huge overhaul in the squad. This will definitely take some time because the damage is huge. Experienced players can become mentors for the young ones and mould them into great cricketers. Apart from this, the board should also consider doing some monetary changes in the contracts offered to the national team, in a bid to keep them within the nation.