Bangar had been widely lauded for his expertise by all and sundry in the country’s cricket establishment till not too long back. 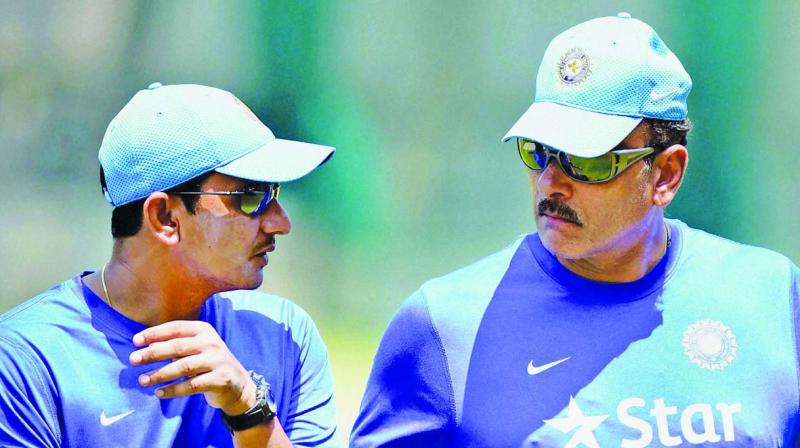 Sanjay Bangar’s imminent ouster as batting coach is baffling. The selectors have put another former India opener Vikram Rathour as their top choice for the job, with Bangar trailing in at no. 2, after interviewing all the applicants.

While bowling (Bharath Arun) and fielding (R. Sridhar) coaches were declared first choices and will get another two-year extension along with Shastri, Bangar has fallen out of favour, finishing runner up to Rathour.

Bangar had been widely lauded for his expertise by all and sundry in the country’s cricket establishment till not too long back. What’s prompted this change of heart in the selectors, when the other coaches were retained, is unclear.

India is currently ranked no.1 in Tests and no. 2 in ODIs. Across all formats, India’s teams have been the most consistent over the past few years, allowing, of course, for the disappointments at losing the Champions Trophy final in 2017 and not making it to the final of the World Cup this year.

The bowling and fielding coaches have been given credit — deservingly so — for the performance of the Indian teams. Unarguably, improvement in these departments has been instrumental in India’s rise to eminence in the sport.

But India’s teams wouldn’t spend long periods in the upper echelons of Test and ODI rankings if the batting did not provide runs for bowlers and fielders to win matches. It would be peevish to deny Bangar’s contribution, to whatever extent, in this.

Of course, India’s batting success has been more pronounced in ODIs than Tests, where the team is still struggling to find a settled batting line-up. Hardly Bangar’s fault though, since this is decided by selectors in consultation with chief coach and captain.

There was a scuttle bug story doing the rounds before the interviews with support staff applicants that Bangar would have to take the rap for the decision to bat MS Dhoni at no.7 in the ill-fated semi-final against New Zealand in the World Cup.

That is outrageous if true. Even if Bangar had advocated demoting Dhoni in that match, the decision could not be only his. He reports to chief coach Shastri, and the final call has to be the captain’s. In a collaborative decision, to penalize only one person would be unfair.

Chief selector MSK Prasad spoke about infusing fresh ideas and enthusiasm now that the World Championship of Test cricket is underway — or words to the effect — in proposing Rathour’s name.

A fine objective no doubt. The Test Championship will create new challenges and new demands for players and coaches alike. But with no disrespect to Rathour’s credentials, Prasad does not quite tell what were Bangar’s shortcomings.

Meanwhile, the process of choosing coaches needs to be streamlined.

Currently it seems too contrived to meet the niceties rather than the rigour of being robustly process driven.

Ideally, the chief coach should be involved in picking his support staff. Ultimately, he has to be on the same page with the other coaches to put his plans into action. To foist somebody who may differ widely from the overall coaching philosophy could be counterproductive.

Of course, this should not lead to cronyism within the coaching unit. One way of preventing this would be to have the chief coach and the chief selector team up with the CAC in the interviews and presentations to select support coaches.

I am not offering a foolproof method, only food for thought, to make the system more logical. The current one is convoluted and a pointless merry-go-round that has no great benefit. Rather, it carries in it the seeds of avoidable controversy.