West Indies are 8th in the standings after 6 matches having won just 1 game — a 7-wicket demolition of Pakistan in their opening match. 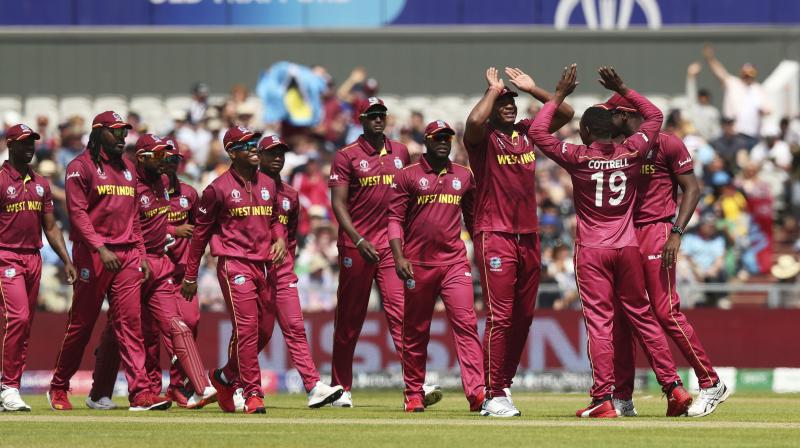 The West Indies had a blistering start, but suffered a top-order collapse and only a rearguard maiden century from all-rounder Carlos Braithwaite meant they got close to New Zealand’s 291 for eight. (Photo:AP)

West Indies need to rethink their tactical approach and pace their innings better at the Cricket World Cup if they are to get the best out of a side full of talent, according to cricketing great Clive Lloyd.

West Indies are eighth in the standings after six matches having won just one game — a seven-wicket demolition of Pakistan in their opening match.

Jason Holder’s side, however, could have been in a much stronger position heading into their next match against India in Manchester on Friday had they not lost to front-runners New Zealand narrowly or let Australia off the hook.

“West Indies could be one of the best teams around — they have the talent,” Lloyd said in his column for the International Cricket Council.

“Ultimately, the difference has been that the West Indies just aren’t settling in and making big scores (and) they’re not putting the clinical finishing touches necessary to win games.”

The Guyanese, who captained the West Indies to the first two World Cup titles in 1975 and 1979, said the five-run loss to New Zealand was the perfect illustration of his argument.

The West Indies had a blistering start, but suffered a top-order collapse and only a rearguard maiden century from all-rounder Carlos Braithwaite meant they got close to New Zealand’s 291 for eight.

The approach was criticised by fast bowling great Michael Holding during his commentary of the New Zealand match, stating he felt the side lacked the ability to buckle down.

Holding said that some of the top-order batsmen seemed to have the mentality that if they scored “80-odd” before they got out they had done their job and it was then up to the rest of the side to get the team home.

Holding’s fellow Jamaican Chris Gayle raced to 87 against New Zealand but was dismissed in the 24th over to leave his side at 152 for five.

Lloyd added that if his former side had a player like New Zealand captain Kane Williamson, who scored 148 by accumulating runs and waiting for the bad ball he could put away, they would have won more games in England.

“Had the West Indies batsmen turned some of those 50s, 60s and 70s, 80s into hundreds they would have been in a better position in the points standing,” Lloyd said, highlighting the fact that six West Indies players, besides Brathwaite, had passed 50 during the tournament.

“Against New Zealand, they were well aware of the asking rate; all they had to do was knock it around. It wasn’t about playing big shots.

“I just hope that they’ve learned from their mistakes and that they can rectify them because they are talented cricketers.”