The confident pair of Hashmatullah Shahidi and Gulbadin Naib inched closer to take Afghanistan to 100 runs. 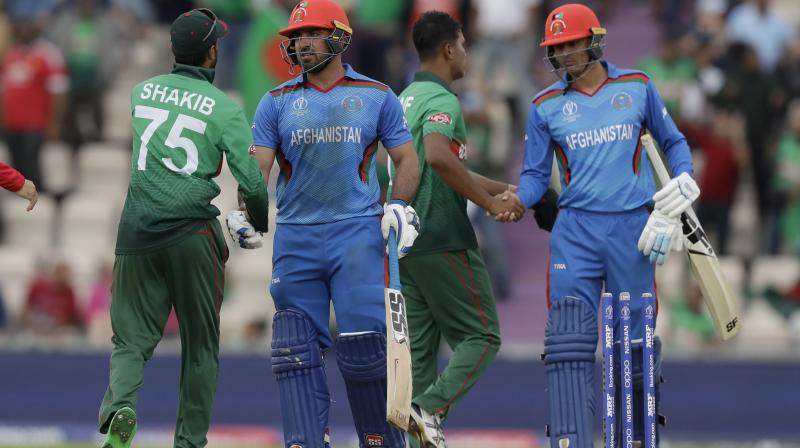 Experienced Mushfiqur joined Shakib and the duo mixed caution with aggression. Both the batsmen eased nerves in the Bangladesh dressing room as they put up a 61-run stand, which saw Shakib bringing up his fifty. This was Shakib's fifth fifty-plus score in this World Cup and as a result, he became the leading run-scorer in the ongoing World Cup with 476 runs. (Photo: AP)

Afghanistan made a good start to their 263 run-chase. The side reached 48 for no loss after 10 overs. However, Bangladesh got a breakthrough as Shakib Al Hasan ended Rahmat Shah's innings for 24. The right-hander was caught by Tamim Iqbal at mid-on.

The confident pair of Hashmatullah Shahidi and Gulbadin Naib inched closer to take Afghanistan to 100 runs, Mushtiqur Rahim stumped Hashmatullah for 11, ending a brief 30-run stand for the second wicket.

Soon after, Gulbadin fell to Shakib as the Afghanistan skipper (47) played a drive and was caught by Liton Das at mid-off. In the same over, Mohammad Nabi, the lone warrior from the previous match, was dismissed for a duck, leaving Afghanistan at 104/4 after 28.3 overs.

Shakib returned and got rid of Asghar Afghan for 20. Samiullah Shinwari and Ikram Alikhil tried their best to drag their side but Liton run out Ikram Alikhil (11). Samiullah, however, found support in Najibullah Zadran. The duo formed a 56-run stand but as they inched closer to 200-run mark, in-form Shakib returned and removed Najibullah for 23, reducing Afghanistan to 188/7.

Afghanistan saw a flurry of wickets towards the end as Rashid Khan, Dawlat Zadran and Mujeeb Ur Rahman returned back to the pavilion without disturbing the scoreboard. Bangladesh folded on 200, with Samiullah stranded on 49. For Bangladesh, Shakib was the pick of bowlers as he scalped five wickets in his 10 overs quota.

Earlier, Mushfiqur Rahim and Shakib scored 83 and 51, respectively, helping Bangladesh to post 262 runs for the loss of seven wickets in their allotted 50 overs after being put in to bat first.

Liton Das and Tamim put up a 23-run stand for the opening wicket, but their stay at the crease was cut short as Mujeeb Ur Rahman dismissed Liton (16) in the fifth over. The in-form Shakib came out to bat next and along with Tamim ensured that Bangladesh do not suffer any more hiccups in the first ten overs.

Shakib and Tamim stitched a partnership of 49 runs but as soon as the stand started looking threatening for Afghanistan, Mohammad Nabi provided the breakthrough as he scalped the wicket of Tamim (36) in the 17th over, reducing Bangladesh to 82/2.

Experienced Mushfiqur joined Shakib and the duo mixed caution with aggression. Both the batsmen eased nerves in the Bangladesh dressing room as they put up a 61-run stand, which saw Shakib bringing up his fifty. This was Shakib's fifth fifty-plus score in this World Cup and as a result, he became the leading run-scorer in the ongoing World Cup with 476 runs.

Afghanistan once again made their way back into the match as they took wickets of Shakib (51) and Soumya Sarkar (3) in quick succession. However, Mushfiqur kept on his merry way. He found support in Mahmudullah and the duo took the team over the 200-run mark.

Mahmudullah (27) departed in the 43rd over, but Mosaddek Hossain played a 35-run cameo off just 24 balls, helping Bangladesh to increase the run-rate. Mushfiqur (83) was sent back to the pavilion by Dawlat Zadran in the penultimate over. Bangladesh scored eight runs in the final over to take their total past the 260-run mark.

Mujeeb was the main destructor with the ball for Afghanistan as he scalped three wickets.

Afghanistan will next meet on Pakistan on June 29, on the other hand, Bangladesh will face India on July 2.