The incident at Lord's happened on Sunday when Pakistani batsmen Imam-ul-Haq and Fakhar Zaman were playing the 14th over. 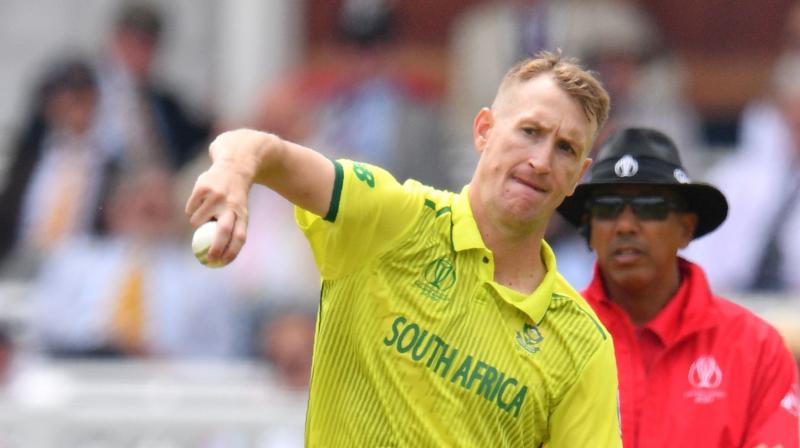 Luckily, the 7th ball did not yield a run for Pakistan or a wicket for South Africa. (Photo: AFP)

Mumbai: One of the two field umpires-Kumar Dharmasena (Sri Lanka) and Joel Wilson (West Indies)-erred in counting the number of balls with a result South Africa's bowling all-rounder Chris Morris could deliver an over of 7-fair deliveries.

The incident at Lord's happened on Sunday when Pakistani batsmen Imam-ul-Haq and Fakhar Zaman were playing the 14th over.

Luckily, the 7th ball did not yield a run for Pakistan or a wicket for South Africa.

James Emmerson, a renowned scorer in England, speaking exclusively said, "I was not at Lords on Sunday, however, I am aware of the incident".

"Law 17.5. is very clear, if the umpire miscounts then the over as counted shall stand. Had the extra ball bought a wicket or runs, that is just the luck of the game".

Interestingly, Emmerson, a scorer for the press, had to officiate in one of the recent World Cup matches as an official scorer (at Taunton) when a designated scorer was absent.

"I have never come across an occurrence of a scorer simply not turning up - I am sure it must have happened somewhere sometime, but I have never known it to occur", he said about the incident.

Narrating another interesting incident of his scoring career, he says, "I was one of the official scorers for the 4th England v South Africa Test at Old Trafford in 2017. On day two we had just made our customary morning drink at around 11.30 and were enjoying some shortbread I had brought in".

"Unfortunately my colleague suddenly brought it all back about 20 minutes later, his vomit went everywhere, and believe me it was as unpleasant as it sounds! We just had to carry on. My Opta colleague dashed out for help, the stadium manager came in and took over, we had cleaners up there scrubbing the desk and floor while we had to carry on scoring as the match was in progress. It was one of those things that could have happened to anyone, obviously, my colleague was deeply sorry for all the trouble etc but it was just one of those things".

"Myself and my Opta colleague scored the rest of the day between us and we had the great pleasure to be joined by the legendary Malcolm Ashton on day 3, which was a wonderful day together", he signed off.