Shakib became only the second player, after India’s Yuvraj Singh, to score a fifty and take a five-wicket haul in a World Cup match. 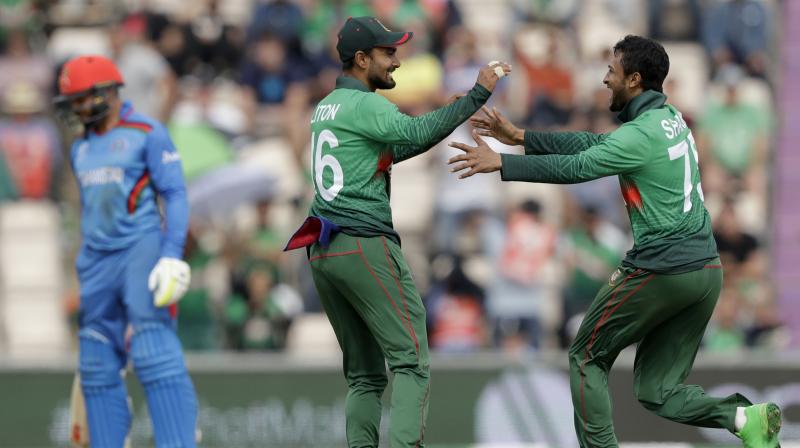 Shakib Al Hasan has been the architect of each of Bangladesh’s three victories at the World Cup but the all-rounder denies they are a one-man army. (Photo:AP)

Southampton: Shakib Al Hasan has been the architect of each of Bangladesh’s three victories at the World Cup but the all-rounder denies they are a one-man army.

The 32-year-old made 51 on Monday to reclaim his position as the tournament’s leading scorer and logged the ongoing World Cup’s best bowling figures of 5-29 in their comprehensive victory against Afghanistan.

His stellar all-round show earned him his third man-of-the-match award of the tournament but Shakib also acknowledged contribution from his team mates, including Mushfiqur Rahim who topscored with 83.

“It’s not like that... we have had several contributions,” Shakib said, dismissing they are essentially a one-man army.

“You always need, especially on wickets like this, to string together small contributions from different players.

“Luckily I’m doing well, but a team can win only if others also contribute.”

Shakib’s fifth 50-plus score in six innings, which also contained two centuries, takes his tally to 476, ahead of Australian David Warner (447).

“We’ve seen the same thing in bowling department too, with others also contributing,” said Shakib who has claimed 10 wickets in the tournament.

“Mustafizur (Rahman) and (Mohammad) Saifuddin also have 10 wickets, which is quite impressive.”

Shakib became only the second player, after India’s Yuvraj Singh, to score a fifty and take a five-wicket haul in a World Cup match.

He is also the first player to score 400 runs and take 10 or more wickets in a World Cup.

The spin-bowling all-rounder, however, refused to rate his performance against Afghanistan which kept their semi-final hopes alive.

“I don’t rank my performance but it’s very satisfying when I’m contributing both with ball and bat.”

Against Afghanistan, the plan was to bat full 50 overs on Hampshire Bowl’s slow wicket and post a total around 240, he said.

“We wanted to bat full 50 overs and if we got some extra runs, we’d take it as bonus. That’s exactly what happened and we got 25 more runs. That gave us an edge, to go out and bowl Afghanistan out.”

Bangladesh face former champions India and Pakistan in their next two matches and Shakib wants the team not to lose their focus.

“We have a very important game coming against India. They are a top side, one of the title contenders. It’s not going to be easy but having said that we’ll give our best shot,” he said.

“They got world class players who can win matches single handedly. We have to be at our best. I believe as a team, we are capable enough.”