The Indian team had defeated an invincible West Indies in the finals to lift the World Cup trophy for the first time. 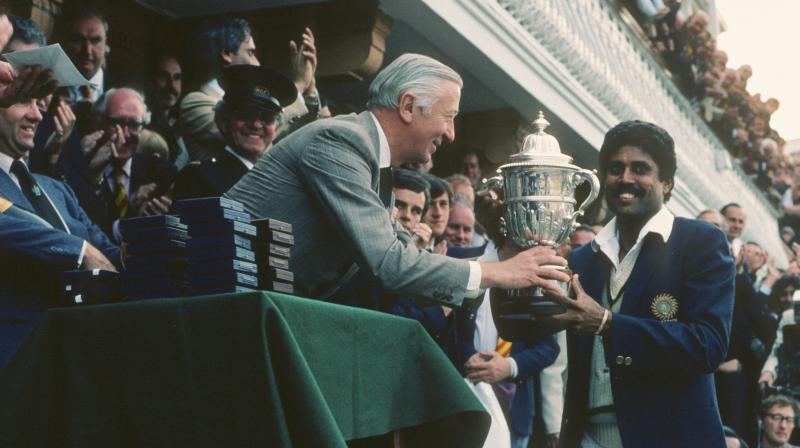 Currently, the World Cup is being played in England and Wales. (Photo: BCCI/Twitter)

The Indian team had defeated an invincible West Indies in the finals to lift the World Cup trophy for the first time.

After the win, cricket got a fillip in the country, elevating the sport to a religion for fans with every child wanting to become a cricketer.

Many cricketers, who are now viewed as some of the greatest ones to have played for India, also view the 1983 feat as a game changer. Many of them took the occasion of the win's 26th-anniversary to voice their feelings about the landmark event in India's cricket history.

The day that started it all. Landmark moment in the history of Indian sports. 25th June, 1983 -the day we were World Champions the first time.
Kapil Paaji's valiant contributions, everyone contributing in their own way, but I think so much of Jimmy Paa, the MOM in semis & finals pic.twitter.com/FmmmXd7ffV

25th June, a very significant day in Indian cricket history - India's first ever Test match in 1932 and also the day we won our first ever World Cup title in 1983, and the face of Indian cricket changed with this victory. pic.twitter.com/69QNlweh4E

These were the iconic scenes at Lords’s #OnThisDay in 1983. Cricket was never the same in India after this. Thanks for Kapil’s Devils for making impossible—Possible. pic.twitter.com/Y2ZJ1Bger5

36 years ago, on this day was one of the greatest moments in the history of Indian sport. India won the Cricket World Cup, Cricket in India changed forever and a generation got inspired . What a moment it was of Kapil Paaji lifting the Cup ! pic.twitter.com/TpOmtcXi7m

On this iconic day, #TeamIndia Head coach & 1983 World Cup winner @RaviShastriOfc takes us back to where it all started 🏆🏆 pic.twitter.com/phMJ2vbAfv

In the final against West Indies, India had scored 183 runs after being put into bat. Krishnamachari Srikkanth top-scored for India with a knock of 38 runs and Andy Roberts took the maximum wickets for West Indies as he sent three batsmen to the pavilion.

West Indies, in its chase, failed to leave a mark as both Madan Lal and Mohinder Amarnath scalped three wickets bundled them out for 140 runs, handing India a win by 43 runs.

India won its second World Cup title in 2011 after 28 years with MS Dhoni as the captain.

Currently, the World Cup is being played in England and Wales. The Virat Kohli-led side are currently unbeaten with four victories. Their match against New Zealand was abandoned due to rain.

India will next take on West Indies on June 27.