A yawning gap between India and Pakistan

This is the Sunday that just about everyone and his grandmother are awaiting with bated breath. 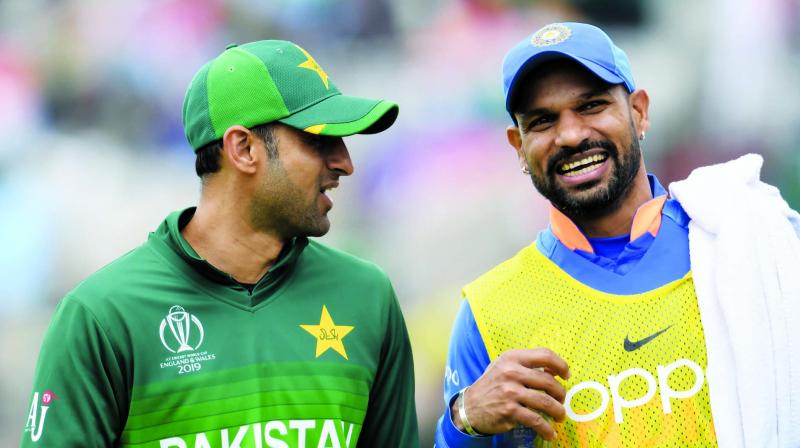 I am penning this piece, in a manner of speaking, early morning on Sunday June 16, though you will be reading this a week later. Why this punctilious time and date specificity and why should the reader be in any way concerned about what my irrelevant writing schedules are? Uno momento. This is not just any old Sunday. This is the Sunday that just about everyone and his grandmother are awaiting with bated breath. It is India vs Pakistan at the World Cup. Not a final or even a knockout game. Just a round robin league match, but try telling that to the fanalunatics (my coinage). In Manchester. Remember that song from the iconic Broadway musical Hair? Manchester England England / Across the Atlantic Sea / And I'm a genius genius / I believe in God……That's me that's me.

The opening lines may or may not have direct resonance to the big game due to start in about 5 hours, as I tap away on my keyboard, but I have plunged into a stream of consciousness method today. Meaning I shall write this piece during different times of the day. So the tense of the piece will jump erratically from present to past to future, as the match progresses. If it progresses at all, given the predictably wavering weather that is greeting cricket fans all over England. We can always believe and invoke God to shine his kindly light. There you are, that's the relevance to that Hair song. The God and Manchester motifs. The kids are singing Rain, rain, go away…..Virat Kohli wants to play. Kids!

The television channels and newspapers have been going bonkers. It would appear that nothing else is happening around the world, and our lives are hanging by a thread, pending the result of the game. The Prime Minister has been cold shouldering his Pak counterpart Imran Khan at Bikshek (wherever that is), and some of our channels have been chortling tastelessly. For my part, I would have been chuffed had Mr. Modi bumped into Immy, speaking metaphorically, in the corridors and said, 'Imran Bhai, you will be serving your country better if you were in Manchester and tried a bit of your famous reverse swing against us. You are wasting your time here in remote Bikshek.' Thus rendering Imran speechless, beaten all ends up.

On the one-upmanship stakes, all channels were ascribing percentages to the chances of the Old Trafford game getting under way, given the number of fixtures already abandoned without a coin being tossed. India's slated game against New Zealand was a total washout, the teams sharing the two points on offer. Predictions ranged from 80% chances of rain playing spoilsport to 40%. I am splitting the difference placing it at 50%, desperately hoping I'd be wrong. Thankfully, so it proved.

Shall now switch off until toss time, if there is a toss. I am sick to my back teeth listening to trumped-up experts mouthing platitudes like, 'It's not the end of the world', 'It's only a game', 'Just another day at the office' etc. Sez who? Can't you understand? It's not just another game. Not by a long chalk. It's war. War paint and everything. Sometimes I actually feel it's better if the game is washed out. Share a point each, go home and play scrabble. Of course, you have to feel sorry for those hyped-up jingoists who bought tickets from scalpers at extortionate prices, lugging Virat I Love You and Dhoni Please Don't Retire banners. Just kidding.  I have little sympathy for these deep pocket wallahs who buy in the black. You deserve to be doused in rain, the more fool you.

As I return to my idiot box for the toss, the usual clips of Indian fans from all parts of the country offering obeisance to a variety of godheads (Tendulkar included) seeking the Almighty's munificence, a) to keep the rains at bay and b) to ensure India puts it across their prickly neighbours in no uncertain terms for the seventh time, the present win-loss ratio in World Cups standing at 6 - 0 in India's favour. Bad news. Pakistan wins the crucial toss, inserts India in and all the pundits proclaim 'Advantage Pakistan.' The ball will swing in heavy conditions, India will struggle to put up a decent score and Pakistan will chase it down with ease. And if the skies do open up and the wretched Messers Duckworth & Lewis get into the act, it will be curtains for India. All done and dusted.

In the event, what transpired? India post 336 runs, the openers flaying the toothless Pakistan swing bowlers to all parts of the field. The Pakistan authorities contemplate complaining to the ICC about being shortchanged on the promised English swing and being given a shirtfront to bowl on. They think better of it, decide to leave it to their Prophet and hope it'll rain buckets later with a good chance of abandonment and shared points. The rains arrived on cue but the game was virtually over, Pakistan having lost too many wickets for too little runs. When hostilities were resumed, Duckworth & Lewis duly crunched the numbers but it was all to India's good. Bharat has triumphed once again over their traditional rivals in a World Cup fixture. So what else is new?

Now here's my prediction for the next World Cup encounter between these two adversaries, awkwardly joined at the hip. It's going to be one big yawn. Even in Manchester, the Pakistan captain kept yawning for the cameras! That's how animated he was. There will be no demand for tickets, the sun will shine mercilessly and the public will be let in free. If you believe that, you are more gullible than I thought. The 2023 World Cup will be played completely and solely in India. I can only reprise that banner entreaty, Dhoni Please Don't Retire. Point to ponder. Will Pakistan come to India?