India’s cricket might and the dollar clout of its diaspora following was lost. 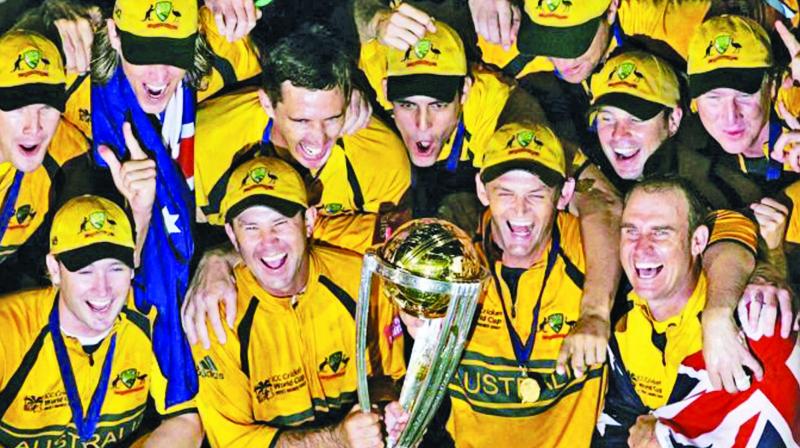 The most shambolic of World Cups did not justice to the most deserving of winners which the Australians were. In another, even more spotless performance of 11 wins on the trot, the world champions completed a hat-trick in what was the least attractive final of nine, played on a rainy day in Barbados.

Twenty years earlier I had been hounded in Barbados for my prediction of doom if a World Cup were to be played in the Caribbean and the final at the Kensington Oval. No one would have wished a fiasco of a World Cup final for which the umpires and referees were also censured and the officials soundly booed at the presentation.

Nine nations invested at least $700 million to live up to ICC’s demanding standards for an even bigger World Cup event with 16 teams. But, in foolishly drawn up groups, the hosts lost two Asian powerhouses - India and Pakistan – to the vagaries of form in the preliminary stage itself and huge cancellations by intending tourists were to blight the holiday islands that had taken up the conduct of the cup event.

Ticket prices running up to as high as $390 for the final were only part of the problem, with excessive security stopping even conches from being taken into the stands robbed the venues of their fantastic Caribbean flavour, fun and frolic. On the positive side, there were great cricketing moments, including the hitting of six sixes in an over by Herschelle Gibbs off the Holland spinner Daan van Bunge, the first ever instance in limited-overs cricket.

As India lost to Sri Lanka and Bangladesh fingers were pointed at internal squabbles in the team coached by Greg Chappell. It was said that Sachin, top scorer of 2003, himself was unhappy to be deprived of the opening slot that Dravid had made over to Robin Uthappa.

India’s cricket might and the dollar clout of its diaspora following was lost.

Ireland pacers found some life in a greenish Barbados pitch on St. Patrick’s Day to knock Pakistan out of the Super Eight. The tragic death of Bob Woolmer, the Pakistan coach, exacerbated by Jamaican investigators ruling it as murder for months until June 12, 2007 when they declared that the diabetic with heart problems had died of natural causes, did not help the Pakistanis either.

A distracted England team, as exemplified by the early morning Pedalo ride of Andrew Flintoff in the sea, lost in a thriller to Sri Lanka and didn’t make it to the semis. As teams fancied to take on the might of Australia faded, the champions did not relent from fulfilling their ambition of improving upon their 2003 performance. Thy made 300 whenever they batted first and 281-4 in the final restricted to 38 overs by rain. They thrice won matches by over 200 run margins.

Matthew Hayden was the batsman of the competition and Glenn McGrath, at 37, still the most incisive bowler. But the man who stole the thunder in the final was Adam Gilchrist with a typically swashbuckling innings of 149 (off 104 balls), now the highest runs ever made by a batsman in a Word Cup final, surpassing his skipper Ricky Ponting’s 140* of 2003 against India. So dominant was the early Australian batting that ‘Mr Cricket’ Mike Hussey hardly got to spend reasonable time at the crease except once when he was sent up the order. As a team, they were just too awesome to be challenged and did not face even the odd glitches as in the previous World Cup.