Ahead of the ICC Cricket World Cup, India lifts the trophy of Street Child World Cup 2019. 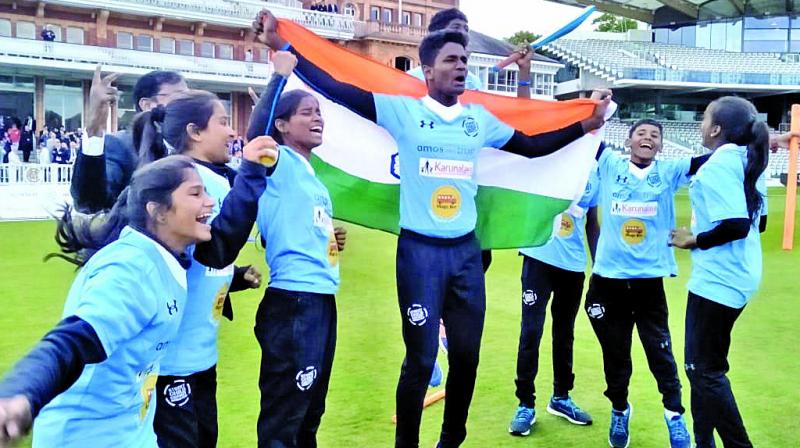 Owing to their backgrounds and limited resources, the kids practiced on their own, helping each other to better their techniques.

As the country gears up to watch the men in blue in action for the 2019 ICC Cricket World Cup, a handful of children from Mumbai’s slums have already made India proud by winning the Street Child Cricket World Cup (SCCWC) trophy. Played at the Lord’s cricket ground in London among nine international teams including Sri Lanka, Tanzania, Democratic Republic of Congo, UK, Pakistan, Nepal, Bangladesh and Mauritius, Team South India, lead by four kids from Mumbai and four from Chennai bettered England in the last match with a five-wicket win in a seven-over match. “We are happy to bring the trophy home. My team was sure to win the game and it is like a dream come true,” says Mani Ratinam, who represented the team as a vice captain.

The first and inaugural edition of the SCCWC was organised by Street Child United – a UK based organisation known for organising sports events such as football World Cups and Olympic Games for street children around the world. “Our strategy helped us to win the match. We knew we have to focus on the weaker players in other teams,” reveals the 17-year-old, who lives in Mankhurd slums and lost his father when he was two. His mother, who works as a housemaid, looks after Mani and his two older sisters.

Fifteen years old Bhavani Mayavan who represented the team as a wicket keeper and a bowler at the Lords, is proud to share her achievement of taking a wicket at the finals. “We played a practice match with all the teams on the very first day and took note of the weaker and stronger players in other teams and focused accordingly,” says Bhavani. She also shares an incident when the young players had to deal with issues among themselves. “One girl from Chennai team screamed at me for not being able to take a wicket, I was very upset but then, she gave me one more chance and I made it,” recalls Bhavani, and adds, “She apologised to me later but I told her not to demoralise anyone in the middle of the game.” Bhavani along with her sister takes care of the entire household work as her mother works as a housemaid.

Owing to their backgrounds and limited resources, the kids practiced on their own, helping each other to better their techniques. However their victory certainly brings a hope to unite people from various nations and bring to fore the lives of those marginalised. “Our team was supportive of each other. Our strong communication has helped us to win the game,” says Bhavani and to this, Mani adds, “We knew from the beginning that we will win and we were not scared of any team.” But Bhawani interrupts and says, “Team Tanzania was a little difficult to beat as they were the strongest team there.”

Busy with their daily chores and schools, the kids are now sharing their journey with their friends and family. Bhawani and Mani are the first ones in their families to have passport and travel abroad. “We all were very scared when the plane took off and landed. We watched movies to divert our mind but it became boring. We were in a different world when we landed at London airport,” recalls Bhavani.

Apart from the games, the team also took part in the General Assembly, which lies at the heart of the SCCWC. In the Thomas Lord suite at Lord’s, the youngsters were able to speak on behalf of street-connected young people from across the world in front of an audience of politicians, leaders and the global media. “We met the mayor of the London. I never thought I would ever get to see all this,” says Mani. This was followed by a series of preparatory Congress sessions, led by Street Child United partners Street Invest, Baker McKenzie LLP and the Consortium for Street Children, in which the youngsters discussed their lived experiences, learned about their rights and were equipped with the skills to be advocates for change.  “We danced with the team after the sessions ended and that was the most memorable thing, apart from the trophy,” added Mani. After winning the match, the children explored London Bridge, Coca-Cola London Eye, Tower of London, Big Ben, and Buckingham Palace.