We can’t give excuses, says Ajinkya Rahane on batting failure 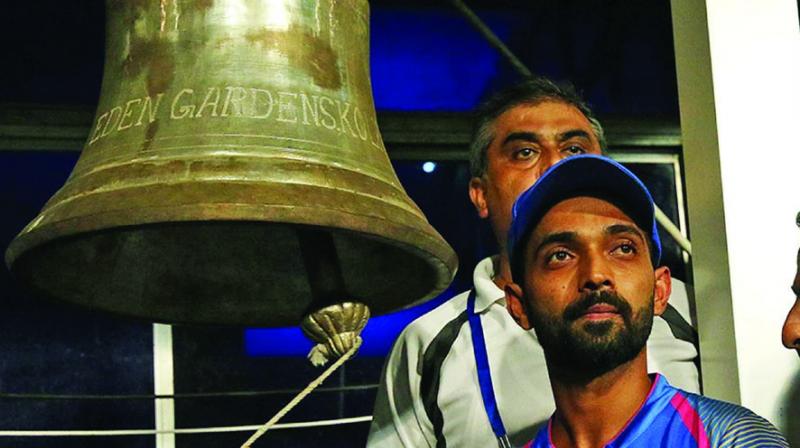 Ajinkya Rahane of Rajasthan Royals rings the opening bell during the Elminator against Kolkata Knight Riders at the Eden Gardens in Kolkata. (Photo: BCCI)

Kolkata: Rajasthan Royals captain Ajinkya Rahane was critical of his team’s batting performance in the lost IPL Eliminator against Kolkata Knight Riders, saying the line-up could not handle the pressure.

Chasing 170, Rajasthan Royals looked good when Sanju Samson (50) and Rahane (46) were in the middle for a fifty-plus partnership. They needed 61 runs from six overs with nine wickets in hand but eventually fell short by 25 runs after the duo’s dismissal. The team seemed to have sorely missed the star English duo of Jos Buttler and Ben Stokes who were recalled for national duty. But Rahane disagreed.

“We can’t give any excuses. They are important and experienced players but we did well (without them) to beat Royal Challengers Bangalore in our last match,” Rahane explained.

Kolkata smashed 55 runs in the last five overs with Andre Russell’s unbeaten 49 from 25 balls but in the same period while chasing, Rajasthan managed just 33 runs. “We backed our batting unit to get the total. We did not get big sixes in the last few overs. Credit goes to KKR bowlers. We need to learn for next season. We batted well in patches and were not that good enough throughout the season,” a dejected Rahane said.

“When you have eight-nine wickets in hand you generally end up getting those runs. Our plan was to bat deep. 170 was chaseable.  Unfortunately Sanju got out in the 17th over... In a pressure game you need one batsman from top four to bat throughout the innings,” he rued.