A Cricket Advisory Committee comprising of Sachin Tendulkar, Sourav Ganguly, and VVS Laxman will interview candidates for the post. 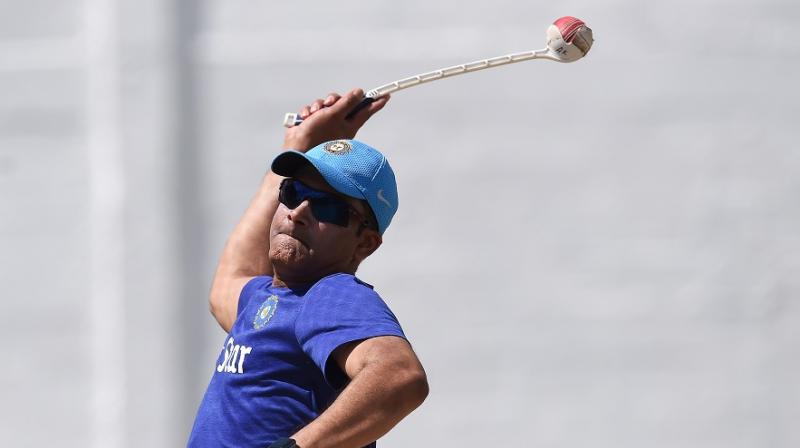 Anil Kumble, being the current Team Ijndia head coach, gets a "direct entry" into the interview process. (Photo: AFP)

New Delhi: The BCCI on Thursday invited applications for head coach's post, sending a reminder to head coach Anil Kumble that he will not get an automatic extension after his current term expires at the end of Champions Trophy.

Interested candidates can apply by May 31st and will be interviewed by the Cricket Advisory Committee (CAC) of Sachin Tendulkar, Sourav Ganguly and VVS Laxman.

"To ensure a fair and completely transparent process, a nominee of the Committee of Administrators (CoA) will oversee the entire process along with the Cricket Advisory Committee," the BCCI release stated.

While Kumble being the current coach gets a "direct entry" into the interview process, the timing of BCCI's announcement makes it clear that the top brass has not exactly been happy with the legendary leg-spinner. The reason being the aggressive stance asking for a massive hike in central contracts for players and his own salary.

India had a great domestic season under Kumble winning 10 out of the 13 home Tests with two draws and a single defeat against Australia on a rank turner at Pune. Also under Kumble, India won a Test series comprehensively in the West Indies.

But of late, Kumble's stance on players' pay hike and the manner of his demands have not gone down well with the powers that be in the BCCI.

"Obviously, he is in contention as the current chief coach," a BCCI official said.

The surprising aspect has been the timing of the announcement for inviting fresh applications as the team just landed in UK on Thursday for their Champions Trophy defence.

"Obviously BCCI could have waited till the end of the Champions Trophy to invite applications. But then no one should take his place for granted," the source added.

"Kumble is bargaining for himself as well as the players. Fair enough but tomorrow if BCCI decides to replace him, he will not be in a position to bargain. Some of his demands have been simply inexplicable," the official said.

The BCCI brass is peeved that Kumble demanded 25 percent extra "captaincy fees" for Virat Kohli as he takes extra burden.

His demands for a position in the selection committee in capacity of being the head coach has also been questioned in all quarters.

Kumble's demand could be a deviation from the Lodha Committee norms as it is clearly mentioned that only three selectors would comprise the selection committee.

As per BCCI constitution, the coach or the captain attends selection meetings but they don't have a vote. The constitution needs to be revamped and the board are unlikely to consider most of Kumble's suggestions.

They have already made it clear that they won't increase the current 26 percent revenue that is reserved for the cricketers and would work around that model.

Tags: team india, anil kumble, board of control for cricket in india (bcci)