However, the sport would be a long way down the pecking order in terms of getting hold of testing equipment 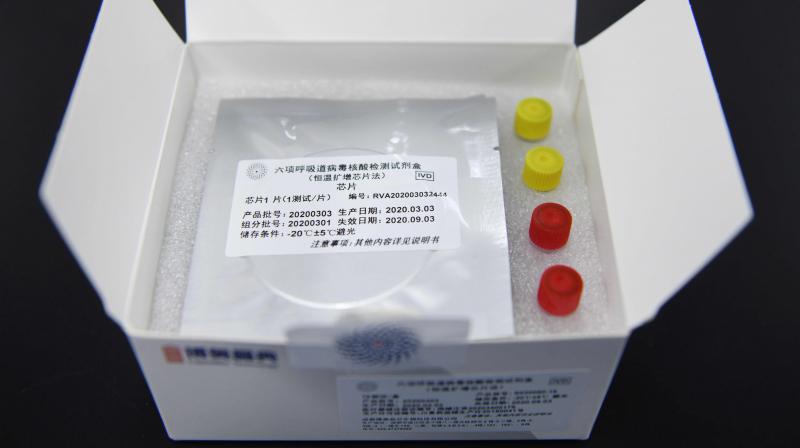 A test kit which can detect six kinds of respiratory viruses including the novel coronavirus. AFP Photo

London: England cricket chief Tom Harrison says the fate of the season depends on access to coronavirus testing as officials work to cushion the financial blow for struggling counties.

But the England and Wales Cricket Board chief executive warned fans that the sport would be a long way down the pecking order in terms of getting hold of testing equipment.

The ECB announced on Friday that the start of the 2020 season had been pushed back again until July at the earliest -- nearly three months after the original scheduled start.

Attempts will be made to reschedule international fixtures for the period from July until the end of September, including the West Indies Test tour of England, which had been planned for June.

Harrison said even if Britain's lockdown eased to allow cricket, games would likely be played behind closed doors, a concept he said the ECB were "starting to get comfortable with".

"Clearly there will need to be a significant testing regime in place," he said in a conference call.

"Right now testing elite athletes or testing people in respect of sport just cannot be a priority in the context of the national health crisis and the issues frontline workers and vulnerable people are facing," he added.

"At the right time this becomes a relevant discussion and government tells us when that is the right time. It's not yet, clearly."

The ECB have made it clear that their priority is to preserve lucrative Tests and limited-overs internationals.

There have been suggestions those fixtures might be moved to potentially "bio-secure" venues such as Old Trafford and Hampshire's Ageas Bowl, which have on-site hotels that allow for easier monitoring of players and officials.

"I'm not sure if 'quarantined' is the right word but there will need to be areas of the ground where only certain people are allowed to go at certain points," said Harrison.

As well as the West Indies series, England are also meant to play a home Test series against Pakistan and limited-overs internationals against Australia and Ireland this season.

But health and travel restrictions imposed by foreign governments could prove a huge stumbling block, with Harrison saying getting international sides into the country was one of cricket's "biggest challenges".

Harrison has previously warned a season without any cricket at all could cost the game in England and Wales more than £300 million ($370 million), echoing dire warnings from other regions.