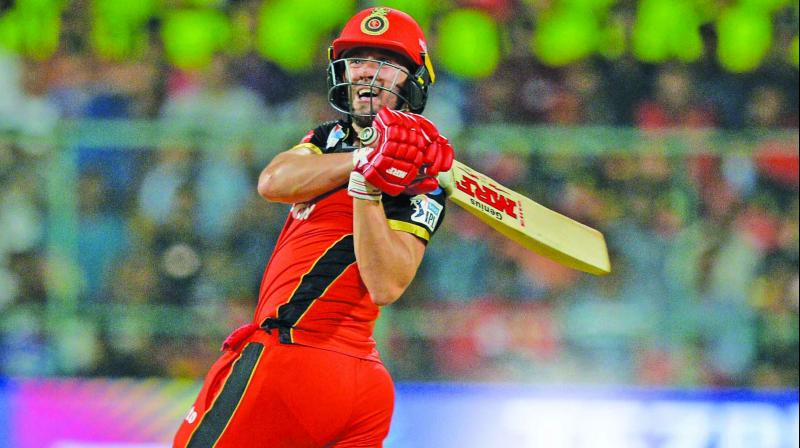 Bengaluru: Royal Challengers Bangalore continued their winning momentum as they posted their third consecutive win to stay alive in the IPl12.

AB de Villiers’ unbeaten 82 off 44 balls and his partnership with Marcus Stoinis (46 off 34) sowed the seeds for RCB’s win as they powered them to  202 for four.

Kings XI were in a hot pursuit of RCB’s total with KL Rahul (42), and Nicholas Pooran (46 off 28) keeping Punjab in the hunt. But Pooran’s dismissal ended Punjab’s hopes.

Earlier, Skipper Virat Kohli was dismissed for 13 runs in the fourth over of the game off a Mohammed Shami delivery after Mandeep Singh held onto a simple catch inside the circle. What followed that gloomy moment at the Chinnaswamy was one of the highest powerplay score of the edition. Parthiv Patel went on the offensive and ripped the Kings XI bowlers apart (particularly Shami).

A blazing 43 off 24 deliveries including seven boundaries and 2 sixes, Parthiv ensured that the powerplay overs were made full use of, with RCB posting 70-1 in the first 6 overs. The keeper-batsman had to depart the following over after being deceived by a wrong one from Murugan Ashwin.

De Villiers, who joined Parthiv at the crease after Kohli’s dismissal watched him, Moeen Ali and Akshdeep Nath all depart one after the other in consecutive overs. Marcus Stoinis, who walked out at four-down was entrusted to build a partnership with De Villiers.

The South African and Australian conservatively nudged the ball around with the odd boundary for a few overs before AB de Villiers did what he does best: accelerate the scoring rate and began to turn up the heat in Bengaluru.

After an excellent 17th over from skipper Ashwin, conceding just 5 runs, Stoinis and de Villiers scored an astonishing 64 runs in the last three overs taking the total score to 202/4.

This also included a southpaw from de Villiers off a Shami delivery that landed on the roof of the Chinnaswamy stadium. It was a phenomenal stand — a 100+ run partnership —  between de Villiers and Stoinis that powered RCB.