CSK look to consolidate their position at top against Mumbai Indians

The MS Dhoni-led side roared back to form after two losses, with a six-wicket win over Sunrisers Hyderabad on Tuesday. 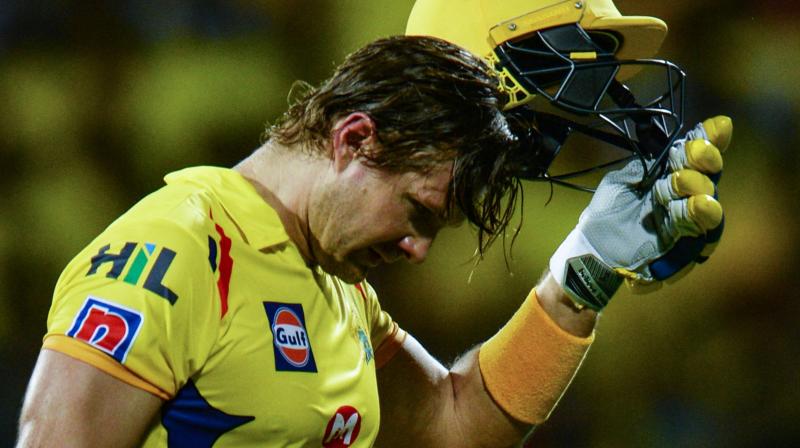 While CSK's must have welcomed Watson's return to form, the team would be hoping for Suresh Raina, Ambati Rayudu and Kedar Jadhav to get going ahead of the knockout phase. (Photo: AFP)

Chennai: They might have already reached the cut-off limit of 16 points needed for the play-offs, but Chennai Super Kings would like to consolidate their position at the top when they take on an inconsistent Mumbai Indians in an IPL match here on Friday.

The MS Dhoni-led side roared back to form after two losses, with a six-wicket win over Sunrisers Hyderabad here on Tuesday night, riding on Shane Watson's big hitting.

Come tomorrow, the hosts would be looking to continue the momentum.

The visitors, currently in third spot with 12 points from 10 games, are coming off a defeat against Rajasthan Royals and will be keen to keep themselves in the hunt for the playoffs.

While CSK's must have welcomed Watson's return to form, the team would be hoping for Suresh Raina, Ambati Rayudu and Kedar Jadhav to get going ahead of the knockout phase.

It is important for Jadhav to get his touch back with the World Cup looming.

The bowlers have played a big role in CSK's success so far, especially at home, on sluggish tracks. The much-improved Deepak Chahar will be key in the matches to come with his intelligent bowling at the start and at the death.

Though Imran Tahir, who is the second highest wicket-taker with 16, went wicketless in the SRH match, the South African veteran will be expected to stymie the powerful Mumbai Indians batting line-up along with fellow spinners Ravindra Jadeja and Harbhajan Singh.

Mumbai have had a roller coaster season so far and they now need to be at their best in the last lap of the preliminary phase.

In Rohit Sharma, they have a shrewd captain who leads from the front, and a solid batting unit that includes Quinton de Kock, Kieron Pollard and the Pandya brothers Hardik & Krunal.

Jasprit Bumrah & Co. will be wary of CSK's batting with Watson having found his mojo again and the ever-reliable Dhoni.

An interesting battle looms between the two three-time champions.