'Selectors have a massive headache before World Cup': Nathan Lyon

'The guys in our dressing room, and with Steve Smith and David Warner coming back – they are world-class players', said Lyon. 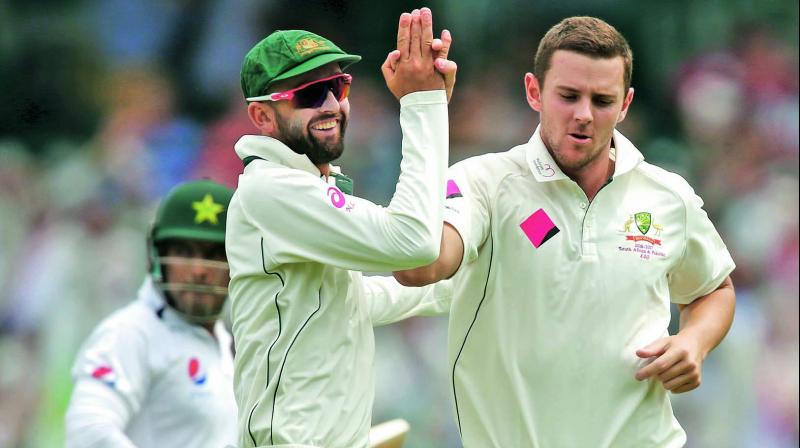 David Warner also made a stunning comeback in the Indian Premier League (IPL) as he scored a stunning 85 for Sunrisers Hyderabad against Kolkata Knight Riders. The batsman said that he hopes that Warner has a fantastic IPL. (Photo: AP)

Dubai: Nathan Lyon, Australia's off-spinner on Sunday said that the national selectors would have a great problem in picking the squad for Cricket World Cup 2019 after Australia defeated Pakistan in the second ODI of the five-match series by eight wickets.

"That is just going to cause a massive headache for our selectors heading into the World Cup. It is a great problem to have for Australia. The guys in our dressing room, and with Steve Smith and David Warner coming back – they are world-class players – we have enough to be adaptable to whatever conditions and scenarios are thrown at us. The guys worked their backside off, firstly, and are now getting the rewards in the middle," Lyon said, as quoted by International Cricket Council (ICC).

David Warner also made a stunning comeback in the Indian Premier League (IPL) as he scored a stunning 85 for Sunrisers Hyderabad against Kolkata Knight Riders. The batsman said that he hopes that Warner has a fantastic IPL.

"I was just told that Dave scored 85, I really hope he has a fantastic IPL," Lyon said.

Aaron Finch paved Australia's way in the second ODI against Pakistan as he scored his highest international score in the ODI format. The skipper of the team recorded 153 not out which had eleven fours and six sixes in it. Lyon was full of praise for the captain.

"Hats off to him, he has been working his backside off. He has not had the runs over the summer that he would like. But he is been working hard with Graeme Hick and Justin Langer. A lot of credit has to go to Finch but also JL and Hicky deserve a pat on the back. It is probably the most controlled innings I have seen him play in a long time," Lyon said.

Australia's pacer Jhye Richardson suffered from a dislocated shoulder and he was flown back to Australia immediately.

"He is obviously pretty shattered but he is trying to stay upbeat, It is very disappointing, especially off the back of the summer that Jhye's had," Lyon said.

"The way he has been performing has been pretty impressive. Fingers crossed he can be fit for the World Cup and be in the selection [mix] there," he added.

Australia after defeating Pakistan in the second ODI have gained a 2-0 lead in the five-match series.

Australia takes on Pakistan in the third ODI on Wednesday, March 27 at Abu Dhabi.