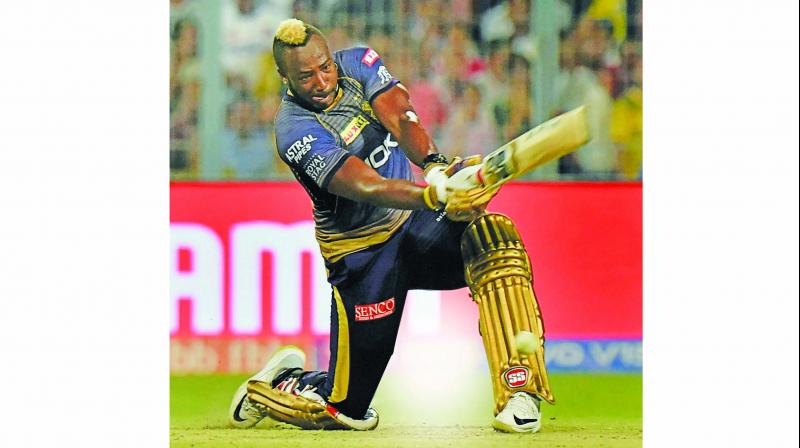 Kolkata: Andre Russell smashed an explosive 49 to spoil David Warner’s scintillating IPL comeback as Kolkata Knight Riders pulled off a dramatic six-wicket win over Sunrisers Hyderabad, here Sunday. Needing 53 runs from last three overs, the powerful Jamaican changed the course of the match with his big-hitting against Siddharth Kaul, creaming off 19 runs from that over.

He retained the strike by taking a smart single and continued his assault on Bhuvneshwar Kumar, who too bled 19 runs in the penultimate over as KKR sealed the 182-run chase with two balls to spare. Russell hammered four sixes and an equal number of boundaries in run sequence that read 6-6-1-4-1-4-6-4-0-6-1.

Youngster Shubman Gill (18 not out) completed the formalities with two sixes off Shakib-Al-Hasan. Promoted to open with Sunil Narine, Nitish Rana made full use of the opportunity and kept them in the hunt with a 47-ball 68. But he departed shortly after a 12-minute interruption caused by tower lights failure.

The momentum slowly shifted in favour of SRH but Russell in a matter of minutes changed the complexion of the match. Earlier, Warner made a stupendous comeback with a scintillating 85, helping his side reach a challenging 181/3. Putting behind the embarrassing ball tampering scandal, that kept him out last year, the Aussie smashed three sixes and nine boundaries in his 53-ball knock.

India World Cup probable Vijay Shankar also made a fine return to the Orange Army with a quick-fire unbeaten 24-ball 40 (2x4, 2x6) following Warner’s exit in the 16th over. Warner’s 37th IPL fifty also made him the first cricketer in IPL to have most 50-plus scores (40) ahead of Virat Kohli (38) as the Aussie also has three centuries. Jonny Bairstow complemented Warner well by giving him the maximum strike as the duo raced to 100-mark in 10.5 overs in their massive 118-run opening partnership.

Having opted to bowl, the otherwise disciplined KKR attack looked clueless against the rampaging Warner who was let off twice while on scores of 21 and 68 by Robin Uthappa and skipper Dinesh Karthik respectively.

Karthik’s captaincy was over-defensive and lost the review to Warner early in the second over, while SRH made full use of the DRS by overturning a decision against Bairstow.

There was no looking back for Warner who batted as if he was never out of action and pierced the gaps at ease with successive boundaries against Piyush Chawla and Sunil Narine to unsettle the otherwise disciplined KKR spinners.

Warner brought his fifty with a six against Andre Russell and then went on to smack India frontline spinner Kuldeep Yadav for his second six. Such was the Warner assault that four of the regular KKR bowlers including the frontline spin duo of Sunil Narine (0/29 in three overs) and Kuldeep (0/18 in 2 overs) did not even bowl their full quota of four overs.