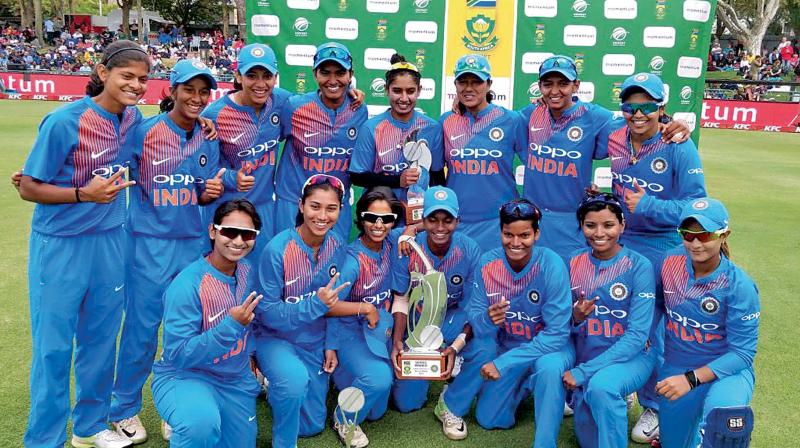 Cape Town: India’s women accomplished a historic double as they outclassed South Africa women by 54 runs in the fifth and final Twenty20 International to clinch the series 3-1, here on Saturday.

After Mithali Raj led the side to a 2-1 series win in the ODIs, it was Harmanpreet Kaur’s turn to lift the trophy as they become the first cricket team to win two formats in the Rainbow nation.

It was Mithali’s exoerience (62 off 50 balls) complemented by the youthful exuberance of Jemimah Rodrigues (44 off 34 balls) that enabled India to register a par score of 166/4 in their 20 overs.

South Africa were never in the match as they were skittled out for 112 in 18 overs with veteran Rumeli Dhar (3/26 in 4 overs) making a mark in the very second match on her return to the side after six years.

Shikha Pandey (3/16 in 4 overs) was certainly the best bowler on view while left-arm spinner Rajeshwari Gayakwad (3/26 in 3 overs) had an easy job with the top half blown away by the seamers. The win also showed that Indian women’s performance in the ICC ODI World Cup wasn’t a mere flash in pan and the women showed little rustiness even though they played their first series in seven months. The big positive was winning a T20 series — a format where the Indian women have not done well traditionally.

“It was a two-paced track to bat on but it became easier to play shots at the later stages. But it’s always nice to be among runs,” Raj, who scored 192 runs in four innings with three half-centuries, said after the match. She won both player of the match and series awards for her consistent scores.

Skipper Harmanpreet on her part spoke about how the series win will bolster their confidence as they get ready to take on Australia and England at home.

“I thought we were 20 runs short but our bowlers performed exceptionally. I thought Mithali di and Jemi (Jemimah) batted well. I though Shikha and PY (Poonam Yadav) really bowled well,” the skipper said.

Mithali started with a couple of boundaries off seamer Shabnim Ismail before launching onto medium pacer Masabata Klaas.

She hit another couple of sixes — one off off-break bowler Raisibe Ntozakhe and other off rival captain Dane van Niekerk.